NIGHT OF THE BRIDE OF PLAN 9 FROM OUTER SPACE

Writer-director Simon Ravenhill cobbles together scenes and characters from three films by the infamous director Ed Wood.  Three of the worst films ever made.  Alien invasions, raising the dead, mad scientists, and an atomic octopus all rub along together in this madcap comedy in which a cast of five rush around to populate the stage with a range of characters.

It is an absolute scream.  Melodramatic and camp in the extreme, the show uses Wood’s inarticulate sensationalism to intentionally comic effect.  Here we laugh with them rather than at Wood’s ineptitude.  It’s a gloriously funny show that subverts the crapness of its origins into slick and silly slapstick.

Simon Garrington appeals as handsome hunk of a leading man Dick, who has trouble keeping his shirt on.  Stuart Horobin impresses as mad scientist Vornoff and army colonel Edwards.  Kaz Luckins stalks hilariously across the stage behind long fingernails as a vampish ghoul.  Richard Nunn makes a remarkably eloquent grunting zombie.  But it’s Rebecca Rochelle who absolutely shines as leading lady Janet, replicating the style of the B-movies with every arch of her eyebrow.  The cast manage to instil energy into Wood’s risible dialogue and throw themselves around with gusto, pulling off quick changes and a variety of broad characterisations that emulate the quirks and mannerisms of the films’ original casts.  There is a lot of desk-slapping and heightened posturing.  What Wood’s actors did from lack of talent, Ravenill’s accomplish with aplomb.

Ravenhill wrings laughs out of every second, keeping proceedings on the right side of shonky.  Video projections complement the action and add to the fun.  And I absolutely loved the ray gun fashioned from a blender.  It’s a show that rejoices in its source material, pulling off with skill and talent what Ed Wood did unintentionally.

A sheer delight from start to finish, this production deserves a bigger audience and a longer life.  Running until September 10th, there are still tickets available from blueorangetheatre.co.uk or 0121 212 2643 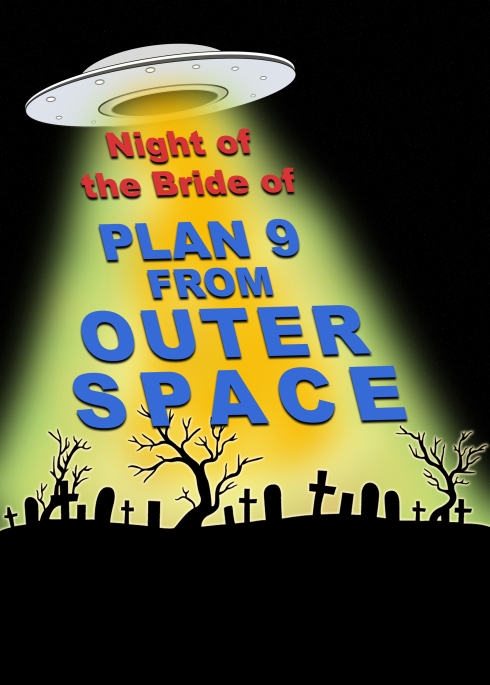 Novelist (Brough & Miller, sci fi, historical fantasy) Theatre critic http://williamstaffordnovelist.wordpress.com/ http://www.amazon.co.uk/-/e/B008AD0YGO and Actor - I can often be found walking the streets of Stratford upon Avon in the guise of the Bard! END_OF_DOCUMENT_TOKEN_TO_BE_REPLACED
This entry was posted on Thursday, September 1st, 2016 at 10:54 pm and tagged with Birmingham, Ed Wood, Kaz Luckins, Night of the Bride of Plan 9 From Outer Space, Rebecca Rochelle, review, Richard Nunn, SImon Garrington, Simon Ravenhill, Stuart Horobin, The Blue Orange Theatre and posted in Theatre Review. You can follow any responses to this entry through the RSS 2.0 feed.
« New Bromantics
Something is Rocking in the State of Denmark »