Ben Jonson’s 1610 comedy owes much to the works of Roman comic playwright, Plautus: the scheming servant using his master’s house for illicit purposes, the characters typified by flaws, fast action and comeuppances – all are here in breath-taking form.

Face (Ken Nwosu) takes advantage of Lovewit’s absence to house a couple of partners-in-crime, namely Subtle (Mark Lockyer) and Dol Common (Siobhan McSweeney).  The former is the titular ‘alchemist’, conjuring jargon and nonsense with which to con their victims into believing that, for the right price, he can supply them with the philosopher’s stone, which Harry Potter fans will know has the power to turn base metals into gold.  The latter is called upon to playact a range of parts to support the cons, including a hilarious sequence involving a fairy queen spinning above the stage.  All three are excellent, displaying the energy and versatility of the hustlers as well as the underlying tensions between them.  Their ‘venture tripartite’ is as volatile as any of Subtle’s concoctions.

They are strongly supported by a range of victims, including a swaggering Joshua McCord as Dapper who wants supernatural assistance for his gambling, a dopy Richard Leeming as tobacconist Abel Drugger who wants the Jacobean equivalent of feng shui to ensure success for his business, and a bombastic Ian Redford as the hedonistic Sir Epicure Mammon who desires nothing less than the mythical stone – and to get his leg over where he may.  John Cummins makes a zealous Ananias, and there is plenty of ridiculous posturing from Tom McCall’s Castril and Tim Samuels’s Surly, in disguise as a Spanish popinjay.

The action is fast, furious and farcical, aided and abetted by some judicious cuts to the text (courtesy of Stephen Jeffreys) and the whole enterprise is pervaded by a sense of fun.  Polly Findlay directs her company assuredly, keeping them on the right side of exaggeration and timing the surprises to perfection.  Long before the time Lovewit (a charming Hywel Morgan) returns and commandeers the proceeds of his butler’s schemes, we are won over by Face, thanks to an agreeable performance by Ken Nwosu, and are glad he (spoiler alert) gets away with it.

At the end, Nwosu strips off his period livery to reveal a Ramones T-shirt and jeans.  He tots up the takings of the evening’s full house and is pleased.  We have all been ‘gulled’ by yet another disguise, or Face, and we thank him for it.  Human nature has no changed a   bit.  Fools and their money are still parted, but tonight we have got the better end of the deal. 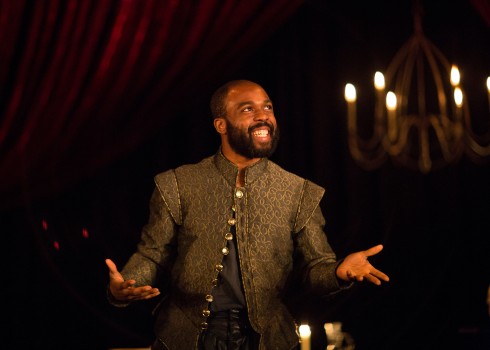 Novelist (Brough & Miller, sci fi, historical fantasy) Theatre critic http://williamstaffordnovelist.wordpress.com/ http://www.amazon.co.uk/-/e/B008AD0YGO and Actor - I can often be found walking the streets of Stratford upon Avon in the guise of the Bard! END_OF_DOCUMENT_TOKEN_TO_BE_REPLACED
This entry was posted on Thursday, June 30th, 2016 at 6:56 am and tagged with Ben Jonson, Hywel Morgan, Ian Redford, John Cummins, Joshua McCord, Ken Nwosu, Mark Lockyer, Polly Findlay, review, Richard Leeming, RSC, Siobhan McSweeney, Stephen Jeffreys, Stratford upon Avon, The Alchemist, The Swan Theatre, Tim Samuels, Tom McCall and posted in Theatre Review. You can follow any responses to this entry through the RSS 2.0 feed.
« Costa del LOLs
Dancing up a Storm »