This production of Victoria Wood’s 1978 play could not be more timely.  Planned before the playwright’s surprising and early death, it now serves as a testament to her brilliance – there is an inevitable memorial air to proceedings, but not in a dour or overt way.  The writer seems very much present; this was an early piece but the style is there: the one-liners, the bathos, the pop culture references (Norman Vaughan, anyone?) along with the witty songs, wherein pain is dressed up in clever rhymes and namedropping of high street brands.

As Maureen, Claire Greenway channels Wood at the paino.  Without attempting an impression, she evokes Wood’s delivery, the timing, the smiles, the eye rolls, while delivering the lyrics as well as Wood’s ornate accompaniments.  I could listen to this all day – but there is much more to the show.

Maureen is accompanying, in a non-musical sense, her friend Julie (Tala Gouveia) to a talent contest in a seedy club.  We go backstage with them to watch Julie prepare, which involves knocking back the Babychams, chain-smoking, and peeing in a hat.  Gouveia is marvellous – her comic timing is spot on, but there is also vulnerability there: her phone call to her no-good boyfriend perhaps reveals more to us than it does to her, and when her history comes to light with club organist Mel (Adam Buchanan), we learn why she wants to escape what her life has become.  Her chance to grasp fame is a way out.  But, not really.

Buchanan is great in his double roles as Mel and the sleazy Compere.  This is the 1970s and sexual harassment is as easy to come by as a raspberry Mivvi.  Mirroring the two women is a double act of male friends, George and Arthur.  George (Brendan Charleson) is an object study in old-school clubland entertainment, in his green jacket and Tony Curtis haircut gone white.  He styles himself as a ‘comedy magician’ and has enlisted as his lovely assistant, Arthur (the sublime Andrew Pollard).  The pair treat us to some vaudeville shenanigans, singing and dancing and some conjuring tricks with scarves and flowers.  It’s a joy to behold them.

The play’s darker side – the exploitation of women in showbiz – is present beneath the surface.  Wood makes her point subtly – above all, she wants to give us a good time.  Which she does, in spades, and it feels like one last time.  The final number has a Sondheimesque feel as, paraphrasing Cabaret, it urges us not to be alone in our rooms but to get out there and enjoy what life has to offer.

An immaculate production, a bittersweet experience, and a fitting tribute to one of this country’s greatest comedy talents, Talent reminds us what we have lost and how lucky we were to have her at all. 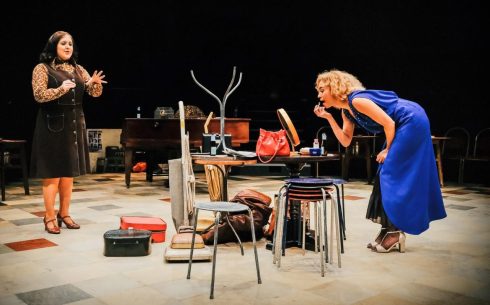 Novelist (Brough & Miller, sci fi, historical fantasy) Theatre critic http://williamstaffordnovelist.wordpress.com/ http://www.amazon.co.uk/-/e/B008AD0YGO and Actor - I can often be found walking the streets of Stratford upon Avon in the guise of the Bard! END_OF_DOCUMENT_TOKEN_TO_BE_REPLACED
This entry was posted on Saturday, May 28th, 2016 at 7:20 pm and tagged with Adam Buchanan, Andrew Pollard, Brendan Charleson, Claire Greenway, New Vic Theatre, Newcastle under Lyme, review, Tala Gouveia, Talent, Victoria Wood and posted in Theatre Review. You can follow any responses to this entry through the RSS 2.0 feed.
« Hell is Pants
Lessons in Love »