Direct from Manchester’s Royal Exchange, this production of Lear jets into Birmingham.  It’s a satisfyingly traditional affair; the setting is the Dark Ages, the stage a stone circle.  Huge structures tower around it.  Signe Beckmann’s design is both evocative and versatile; the circular acting space serves as royal palace and blasted heath.  The costumes too convey the period.  We are in Game of Thrones territory and the characters behave badly accordingly.

Don Warrington makes a stately entrance as the eponymous monarch, in Jon Snow furs, but it’s soon apparent that he has already lost a marble or two, with his irrational game for the throne.  Whichever of his three daughters loves him best, will get the largest share of the kingdom.  It’s a lesson for all those with kids – don’t give them their inheritance while you’re still alive; they will only treat you abominably!  Warrington is powerful as the king losing his faculties and he is at his best, not when he is howling with grief, but in the quieter moments of clarity and self-awareness.  That really hits home.  Nowadays, if a playwright wants to write a piece about dementia, there is plenty of research material and you can probably get funding too; Shakespeare works purely from observation and I wonder who it was that he observed in order to depict the condition so accurately…

Philip Whitchurch is magnificent as the Earl of Gloucester – his journey is as devastating as Lear’s.  The blinding scene is a shocking slice of Grand Guignol, deliciously gruesome – director Michael Buffong should use that energy and ‘attack’ in other scenes; the pacing is somewhat pedestrian at times, making me long for judicious cuts – of the text, I mean, not the cast!

Fraser Ayres makes an enjoyable villain as the bastard Edmund and I also like Thomas Coombes’s rather flamboyant Oswald.  The Fool (Miltos Yerolemou) seems a little too sorrowful right from the off – he first appears as Matt Lucas in a Robert Smith wig – even his best japes are tinged with sadness.  He ends up like a bedraggled Miriam Margolyes – before his disappearance from the action.  Rakie Ayola and Debbie Korley are suitably nasty as evil bitches Goneril and Regan, while Norman Bowman’s Cornwall lends a Scottish lilt to the dialogue.  You wouldn’t want to endure the hospitality of any of them.

Alfred Enoch throws himself around as Edgar, disguised as ‘Poor Tom’, Wil Johnson’s Kent is suitably noble, and there is strong support from the likes of Sarah Quist and Sam Glen in ensemble parts.  Atmosphere is created in abundance by Johanna Town’s lighting and Tayo Akinbode’s sound design – distorted winds underscore turbulent thoughts.

On the whole, it’s an admirable production, a clear and straightforward handling of the tragedy that does not rely on gimmicks.  Excellently presented, it does however lack a certain something, a certain spark, to keep you gripped for its three-and-a-half hours. 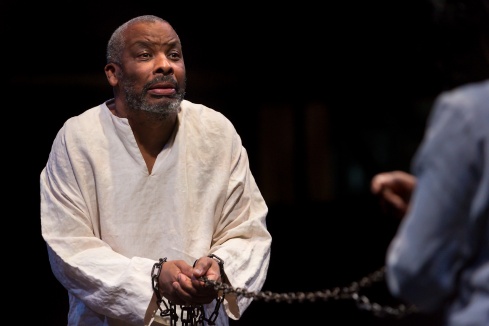