A Date with the Don

English Touring Opera brings a new production of what, in my view, is the finest opera ever written – I always look forward to new productions with a mix of excitement and trepidation: will I be outraged by liberties taken with staging and interpretation?

Prepared to vent my dismay, I take my seat…

The setting is 1900s Vienna, or rather beneath the city.  Apparently it was quite the thing back in the day: the workers who had built the network of tunnels ended up living down there, with nowhere else to go.  My first impression is that Anna Fleischle’s set may be too dark and gloomy for the more humorous sections… but it turns out my worries are unfounded.  If anything the humour shines through.  The set and the atmospheric lighting (by Guy Hoare) cannot swamp the irrepressible Don Giovanni or indeed Mozart’s rich and vibrant score.

Nicholas Lester is a tall, dark and handsome Don Giovanni – you want your lotharios to be swoonsome and he most certainly is.  His baritone is seductive, like being tempted with melted dark chocolate, and his hearty laughter is delicious.  He forms an hilarious double-act with his servant Leporello (a marvellous Matthew Stiff), here looking rather well-fed, so we can take his protestations about the privations he suffers with a whole peck of salt.  Leporello’s catalogue aria is one of the comedy highlights of the night.

Ania Jeruc’s Donna Elvira is suitably wild-eyed, driven to derangement by her undying devotion to Giovanni.  Strident but never shrill, Jeruc brings a touch of the exotic to the piece.

Gillian Ramm’s Donna Anna may be small in stature but she’s a powerhouse of emotion, and she is paired with a Don Ottavio (Robyn Lyn Evans) that for once actually seems to have a pair himself.  This Ottavio is upright, decent and above all strong – you don’t always get that.

Lucy Hall is sweet and funny as peasant bride Zerlina – her ‘Beat me’ aria is cute and flirtatious.  Bradley Travis brings out handsome husband-to-be Masetto’s hotheadedness and indignation.

We’re all waiting to see how the murdered Commendatore (Piotr Lempa) will be staged, when he returns to take Don Giovanni to Hell.  Here the tunnels and shadows of the underground setting come into their own.  A chorus of demons, here reminiscent of the workers who built the place, stand sinisterly around Giovanni, before carrying him away like pallbearers.

John Andrews conducts with verve – all the colours of Mozart’s impeccable score are brought out, sometimes at quite a lick.

A thrilling, witty production (the translation by Jeremy Sams is clever and laugh-out-loud funny) it is also stylish and powerful.  The design supports the action – there are glimpses of colour reminiscent of Gustav Klimt – director Lloyd Wood’s ideas enhance the libretto, and the actor-singers are the focus of the production.

Every time I hear it, I marvel that something so wonderful can exist, can be created by a human being.  This production by English Touring Opera reaffirms the notion that Don Giovanni is one of humanity’s finest achievements. 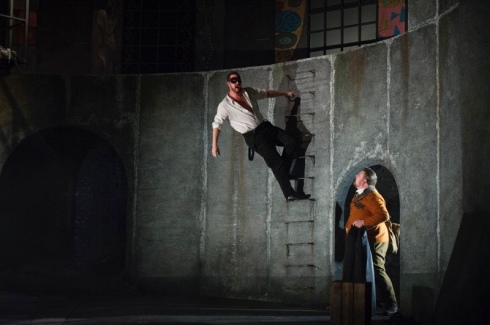