The whodunit is a staple of the touring theatre circuit.  We enjoy trying to puzzle out the identity of the killer – there is pleasure in being proved right and, if wrong, there is admiration for the writer and the production that has led us so merrily up the garden path.  In this respect, David Rogers’s adaptation of a story by Ricard Levinson and William Link (the writers of Murder, She Wrote, no less) is no different from others doing the rounds.  How it differs, how it sets itself apart from and above most of the rest, is with a sophisticated structure and a truly clever conceit that, I readily admit, I didn’t twig.

Set in an empty theatre (shades of The Woman in Black) playwright Alex Dennison (Robert Daws) sets up for a reading of his latest work.  It’s all a ruse to unmask the murderer of his fiancée, the actress Monica Welles (Amy Robbins) a year ago.  The cast assembles and through a series of flashbacks, Dennison narrates events of that fateful night and then stages new scenes, hoping to catch the conscience of the killer.  He has a police officer ready-planted in the stalls…

As mastermind Dennison, Daws owns the stage, able to drop out of narrator mode into some highly-charged emotional scenes.  Amy Robbins brings old-school glamour to the role of the ill-fated Monica, while Robert Duncan is good fun as irrepressible old luvvie David Mathews.  Susan Penhaligon is enjoyable as Bella, the overbearing producer, delivering some of the show’s best lines with relish.  Steven Pinder is good as neurotic director Lloyd, and there are energetic performances from Ben Nealon as the ‘juvenile’ Leo Gibbs and Lucy Dixon as ‘ingenue’ Karen Daniels.  It’s all slightly larger-than-life and on the leeward side of camp, making for an enjoyable watch and an intriguing mystery.  Despite being told from the off, we are going to be deceived, I genuinely don’t see the reveal coming.

Roy Marsden directs with an assured hand.  The sophisticated structure is handled with clarity and style, making for a delightful evening and a fresh take on a popular genre, expertly performed by a likeable ensemble. 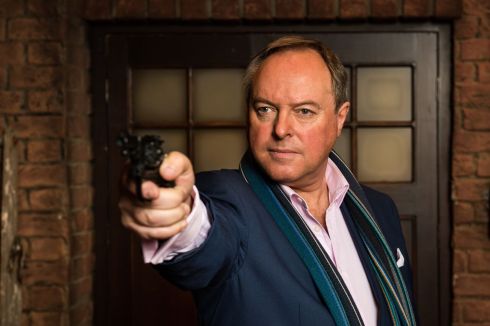 Novelist (Brough & Miller, sci fi, historical fantasy) Theatre critic http://williamstaffordnovelist.wordpress.com/ http://www.amazon.co.uk/-/e/B008AD0YGO and Actor - I can often be found walking the streets of Stratford upon Avon in the guise of the Bard! END_OF_DOCUMENT_TOKEN_TO_BE_REPLACED
This entry was posted on Tuesday, May 10th, 2016 at 5:48 am and tagged with Amy Robbins, Belgrade Theatre Coventry, Ben Nealon, David Rogers, Lucy Dixon, Rehearsal For Murder, review, Richard levinson, Robert Daws, Robert Duncan, Roy Marsden, Steven Pinder, Susan Penhaligon, William Link and posted in Theatre Review. You can follow any responses to this entry through the RSS 2.0 feed.
« Talking Shop
A Date with the Don »