Frederick Knott’s classic thriller bears repeated viewing (this is my third or fourth production) not least because it’s not a whodunit – it’s more of a will-he-get-away-with-it?  And even if you already know the answer to that, there is still much to reward the audience in this tautly written, expertly plotted piece.  A lesson in crime-writing.

Tony Wendice (Oliver Mellor) is plotting to bump off his wife Sheila (Terri Dwyer) and so enlists former school acquaintance and Jeremy Clarkson lookalike (Jolyon Young) to do the actual deed.  Knott has the two men talk through the plan in detail so we know what’s coming.  This adds to the suspense.  A phone call is to be the inciting action… When it happens, the playwright shows he has surprises up his sleeve.

Oliver Mellor is rather good at being bad.  His Tony is a manipulative, assertive bully – I enjoy disliking him from the off.  Terri Dwyer cuts an elegant figure in 50s couture and, of the entire company, she captures the acting style of the period without descending into spoof or caricature.  Marcus Hutton gives a suave and earnest turn as Sheila’s erstwhile lover Max.  The dialogue, somewhat dated now, sounds fresh coming from these more-than-competent actors.  I find it hard to credit that the young Mellor and the older Young were at the same school, however fleetingly, but I suspend my disbelief and let that go.

Completing the company is an enjoyable John Hester as Inspector Hubbard, deadpan and perspicacious.  We get just much pleasure from watching him unpick Wendice’s deadly scheme.  Director Patric Kearns handles the suspense and the violence well, and the show looks great, courtesy of Geoff Gilder’s design and David North’s lighting.  Production company Talking Scarlet has mounted a solid, dependable staging of a play that epitomises the genre.  Very satisfying. 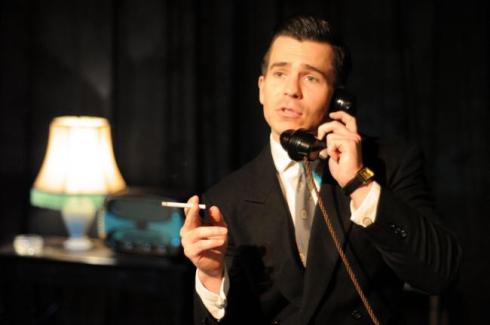 No, I don’t have PPI – Olvier Mellor as Tony Wendice