BRING ON THE BOLLYWOOD

Katrina is a doctor – the trouble is she’s 32 and unmarried.  She’s off home to India to attend the wedding of her brother – her younger brother – and longs for the kind of romance she sees in Bollywood movies.  Unrealistic, silly, breath-taking romance.  On the plane, she encounters Ranbir, off on a spiritual mission in aid of his sick father.  Ranbir carries an urn of ashes with him as he mourns for a lost relationship…

These two are our narrators for the piece, both of them accessible and likeable characters.  We know they are destined to end up together as soon as they lay eyes on each other, but we enjoy seeing them work this out for themselves.

As Katrina, Sohm Kapila does a nice line in sardonic, deadpan humour.  You can’t help liking her.  Adam Samuel-Bal’s Ranbir is the handsome romantic lead, albeit a geeky, inhibited English one.  We meet her family and his friend and the complications set in, setting the stage for a My Big Fat Greek Wedding-style rom-com, with ethnic humour and the clash of cultures.  There is even a bit of Goldsmith’s She Stoops To Conquer in the mix, when Ranbir and his mate Amit (Rishi Nair) are hoodwinked into thinking Katrina’s parents’ home is a hotel.  In fact, the plot is an all-you-can-eat buffet of comic conventions: deceptions, mistaken identities, misunderstandings…

The funniest scenes are between Katrina’s parents, Colonel Sundar (Rohit Gokani) and Lalita, the professional matchmaker (Sakuntala Ramanee) who bicker and verbally spar with expert timing.  Excellent, both of them.  Here, the script by Samir Bhamra and Steve Nijjar is at its sharpest.  The pair are hardly a good advertisement for the arranged marriages they strive to set up for everyone else!

The action is interrupted by song and dance numbers in the Bollywood style – energising, upbeat, very camp numbers (choreography by Subhash Viman) and at first, they don’t serve the drama or develop character, as we would expect in musical theatre.  Later, as the drama unfolds, this is not the case: characters perform solos and duets: Kapila and Samuel-Bal are in fine voice, although Rishi Nair’s vocals struggle somewhat to match the quality.  Nair makes up for this with some expert reactions, including spit-takes.  Also, playing it broad is Bhavin Bhatt as Katrina’s brother Lucky, a womanising mummy’s boy, flirting with members of the audience.  Nikkita Chadha’s Rekha, with an enthusiasm for the melodramatic, is more than a pretty face in a pretty outfit, delivering her lines with charm and killer timing.

Director Samir Bhamra uses cinematic conventions from the genre (like slow-mo) while heightening the theatricality of the piece.  Some moments don’t come across: there is a ghost story, for example, that doesn’t cut it, but the likeability of the ensemble carries us through the odd patchy bit.

Never less than amusing, often hilarious, Bring On The Bollywood proves to be an irresistible banquet of fun. 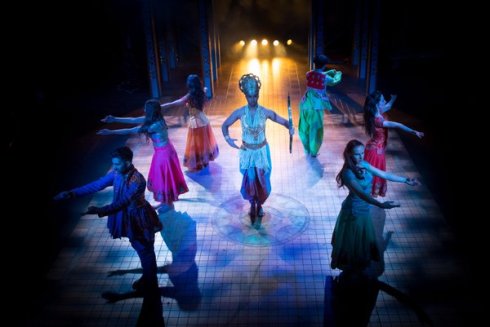 Bring it on: One of the more sober moments!

Novelist (Brough & Miller, sci fi, historical fantasy) Theatre critic http://williamstaffordnovelist.wordpress.com/ http://www.amazon.co.uk/-/e/B008AD0YGO and Actor - I can often be found walking the streets of Stratford upon Avon in the guise of the Bard! END_OF_DOCUMENT_TOKEN_TO_BE_REPLACED
This entry was posted on Wednesday, April 27th, 2016 at 7:11 am and tagged with Adam Samuel-Bal, Belgrade Theatre Coventry, Bhavin Bhatt, Bring On The Bollywood, Nikkita Chadha, review, Rishi Nair, Rohit Gokani, Sakuntala Ramanee, Samir Bhamra, Sohm Kapila, Steve Nijjar, Subhash Viman and posted in Theatre Review. You can follow any responses to this entry through the RSS 2.0 feed.
« Folk Tale
Murder Most Enjoyable »