Nikolai Gogol’s comedy, a satire of Czarist Russia, is brought to exuberant life in this sparkling adaptation by David Harrower.  Director Roxana Silbert has gathered the most inclusive company I’ve ever seen: disabled and non-disabled actors, sign language users and interpreters, all appear side-by-side in this fast-moving, frenetic and farcical story of misunderstanding and mistaken identity.   Everyone is in costume and a character in their own right, rather than segregating interpreters in a spotlight at the side of the stage.  In fact, the expressive nature of signing lends itself very well to the heightened, exaggerated style of comic performance needed to keep Gogol’s balloons in the air.

Much of the show’s comic energy comes from one man.  David Carlyle is the manic Mayor of the little town expecting a visit from a government official.  Carlyle must be knackered by the interval – he’s certainly exhausting to watch and very, very funny.  His wife and daughter (Kiruna Stamell and Francesca Mills respectively) match him in terms of larger-than-life characterisations.  Stamell’s pretentious use of French words and phrases is a delight, as is Mills’s immature frustration.  Stephen Collins and Rachel Denning form a funny, Little and Large double act as Bobchinsky and Dobchinsky careering around the stage with a flair for physical comedy.  Sophie Stone amuses as the less-than-honest Postmaster and I particularly like Michael Keane’s starving servant Osip, whose master, the conniving opportunist Khlestakov is marvellously portrayed by Robin Morrissey.  Gogol lets us in on the joke from the off, allowing us to see Khlestakov’s cogs turning.  Jean St Clair’s Judge Lyapkin-Tyapkin is elegantly expressive and none-the-less funny – In fact, the entire company is unflagging in its efforts to maintain the show’s fast pace.  The laughs keep coming.

Ti Green’s skeletal set serves as all locations.  Much fun is made with the revolving door and I love the running joke of the lift with its muzak and prerecorded voice.  Chahine Yavroyan’s lighting adds to the humour, with some sharp changes to highlight the characters’ frantic asides.

Years ago I saw a production of this play that fell completely flat.  I am pleased to say this smart and snappy show has exorcised the ghost of that failure.  The playing is broad but detailed – Silbert overlooks nothing in order to wring as many laughs as possible from the situation, the script and her hard-working, talented cast.

The play exposes human foibles in all ranks of society.  Man is essentially corruptible, Gogol points out, putting us all in the same box.  Surely it can’t be relevant to us today.  Can it?  I rather believe it is. 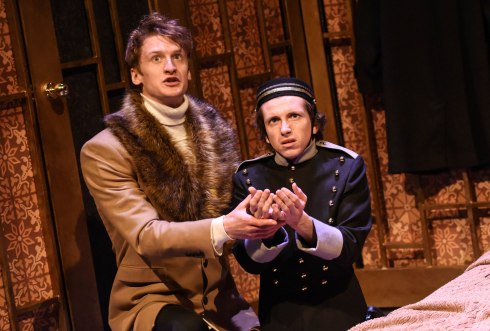