Helen Edmundson’s new play is her best yet. A five-act history following the Shakespearean model, it tells the story of the accession to the throne of Anne Stuart and deal with a large part of her reign. That’s the backbone of the piece but really it’s about the relationship between two women: Anne and her friend since childhood, Sarah Churchill. It becomes apparent to us, far sooner than it does to the Queen, that Sarah is manipulating the monarch for her own ends and advancement and does not requite Anne’s affection – it is strongly suggested that Anne’s affection runs to lesbianism or ‘rampant femininity’ as somebody calls it.

Emma Cunniffe is an arresting presence as dowdy Anne, with a gammy leg and apparent weakness. She’s a washed-up Richard III, without of course the Machiavellian tendencies. We feel sympathy for her and also a desire to get out of our seats and shake her until she sees what’s happening under beneath the Royal hooter. Natascha McElhone cuts a glamorous figure in comparison as the conniving Churchill, commanding, strident and shrill – you wouldn’t want to cross her.

There is a touch of Yes, Minister to proceedings as courtiers and advisors jockey for position and favour. Jonathan Broadbent’s smarmy, toadying Harley is on the make, in an enjoyable performance, while Richard Hope’s decent and upright Godolphin is the moral rudder, without whom Anne runs adrift. A cameo by Carl Prekopp as King William III leaves an impression – the playing is as loud as the costumes – and Michael Fenton Stevens is a lot of fun as Dr Radcliffe. I also like Tom Turner’s Jonathan Swift, with his Brian May wig and his soft Irish burr.

The play also charts the rise of Abigail Hill (an excellent Beth Park) from destitution to Queen’s confidant (and carrier of the chamberpot). It’s a story where the personal and the political are very much intertwined – inseparable, in fact – and it’s something of a history lesson too without being didactic in the slightest. It closes with Anne’s final rejection of Sarah, having seen the light, leaving her erstwhile friend languishing in delusion.

Enlivened by ribald songs, bawdily presented, enriched by lively characterisations and witty dialogue, expertly performed, Natalie Abrahami’s production is a gripping, entertaining and satisfying look at the early years of the eighteenth century – with, of course, inescapable mirroring of our current situation, as the UK considers yet again the costs and profits (if there can be any) of war. 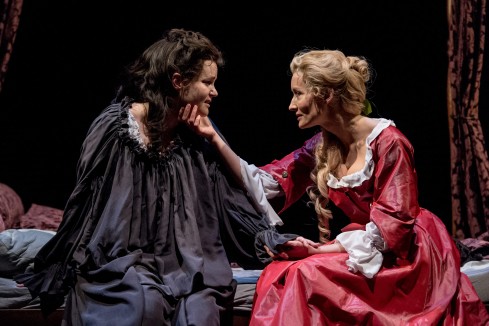 Novelist (Brough & Miller, sci fi, historical fantasy) Theatre critic http://williamstaffordnovelist.wordpress.com/ http://www.amazon.co.uk/-/e/B008AD0YGO and Actor - I can often be found walking the streets of Stratford upon Avon in the guise of the Bard! END_OF_DOCUMENT_TOKEN_TO_BE_REPLACED
This entry was posted on Thursday, December 10th, 2015 at 10:34 am and tagged with Beth Park, Emma Cunniffe, Michael Fenton-Stevens, Natalie Abrahami, Natascha McElhone, Queen Anne, Richard Hope and posted in Theatre Review. You can follow any responses to this entry through the RSS 2.0 feed.
« An Aladdin’s Cave
Fangs A Lot »