Stephen King’s novella gave rise to one of the most popular films of all time. For this new touring production, Owen O’Neill and Dave Johns return to the film’s source material and adapt it for the stage. Film fans will notice differences – inevitable, given the differing natures of the art forms. That said, O’Neill and Johns do a bang up job with this story of prison life.

Red (Patrick Robinson) is our part-time narrator in this sparsely populated penitentiary (over-crowding is no problem in Shawshank!) introducing us to a lively bunch of characters, not all of them pleasant. There is Leigh Jones’s Rooster who laughs like a maniacal drain every chance he gets. Rooster is teamed with Bogs (Kevin Mathurin) to form a pair who stop at nothing to assert their dominance among the men. We met Brooksie (Ian Barritt) an old lag completely institutionalised by his lengthy sentence, and Lady Chatterley fan Rico (Declan Perring).   Then newcomer Andy Dufresne arrives, wrongfully convicted of the murder of his wife and her lover. Dufresne stands out – Ian Kelsey gives him a stillness and steadiness, making him a quietly compelling figure among the other, larger-than-life inmates.

The story is episodic in nature, building up a picture of prison life and charting Andy Dufresne’s growing stature among the inmates, the guards (for whom he files tax returns) and the Warden (for whom he cooks the accounts).   Unless the characters mention it, we don’t really get a sense of the passage of time but nevertheless the story builds to an emotional climax that still brings moistness to the eye.

Shawshank Prison is well worth a visit. 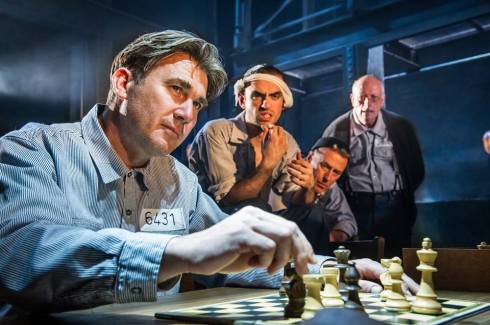 Novelist (Brough & Miller, sci fi, historical fantasy) Theatre critic http://williamstaffordnovelist.wordpress.com/ http://www.amazon.co.uk/-/e/B008AD0YGO and Actor - I can often be found walking the streets of Stratford upon Avon in the guise of the Bard! END_OF_DOCUMENT_TOKEN_TO_BE_REPLACED
This entry was posted on Tuesday, September 29th, 2015 at 6:51 am and tagged with Chris Davey, Dan Samson, David Esbjornson, Declan Perring, George Evans, Ian Barritt, Ian Kelsey, Joe Reisig, Kevin Mathurin, Leigh Jones, New Alexandra Theatre Birmingham, Owen O'Neill, Patrick Robinson, review, Stephen King, The Shawshank Redemption and posted in Theatre Review. You can follow any responses to this entry through the RSS 2.0 feed.
« Life at a sitting
Played to the hilt »