Trevor Nunn’s new production of Ben Jonson’s 1606 comedy is contemporary in setting and feel.  It is our world of smart phones and tablets, of ECG machines and CCTV.  The text too has been tweaked to include present-day references to the Grecian economy, for example, bringing the satire up-to-date.  The point is to remind us that human nature has not changed.  The flaws and foibles Jonson satirises remain all too current.

Volpone is a con artist, fleecing avaricious types who seek to inherit his fortune.  You can almost see the pound signs in their eyes as they flock to what they think is his death bed.  In the title role, Henry Goodman is magnificent, smooth and slick; his Volpone has an innate sense of fun.  He is a conman we can admire – part of the enduring appeal of stories about confidence tricksters is our enjoyment of the cleverness of the scam, being in on it with the tacit acknowledgment that we, the audience, would never be duped… And, of course, the victims deserve what they get; they are terrible people.

The excellent Matthew Kelly is Corvino, a jealous, abusive tyrant of a husband, who turns out to be willing to whore out his wife if it means he will be named Volpone’s heir.  Geoffrey Freshwater is in good form as the doddering Corbaccio, willing to disinherit his own son in order to secure Volpone’s riches.  We enjoy seeing these men stitched up, due to Goodman’s splendidly timed asides and hilarious fakery.  A baldie wig and no small amount of drooling work wonders.  True, Volpone too is motivated by avarice but his victims are taking advantage of what they presume is a feeble invalid at death’s door.  Where Volpone oversteps the bounds of what is acceptable is when he attempts to force himself on Corvino’s comely Mrs, Celia (Rhiannon Handy).  This is why Volpone has to be punished at the end.

Goodman is a thoroughly charming silver fox and each disguise he assumes is audaciously funny, for example the Italian mountebank who mangles the English language into something that sounds ruder than it is.  Volpone is aided and abetted by his able sidekick, Mosca (the elegantly expressive Orion Lee) – a bit like Clouseau’s Cato but without the impromptu karate attacks.

Annette McLaughlin is funny as the grotesque Lady Politic Would-Be, here portrayed as a self-obsessed reality TV diva, complete with cameraman in tow.  The ever-appealing Colin Ryan makes Peregrine a likeable American backpacker, and Andy Apollo makes Bonario a dashing heroic figure.  The peculiar trio of a dwarf, a eunuch and a hermaphrodite (Jon Key, Julian Hoult, and Ankur Bahl, respectively) add a bizarre touch of colour to proceedings.  Every home should have such a trio.

The action shifts along at quite a lick – you barely notice the running time – and the show belongs to Henry Goodman, in the most entertaining performance of the RSC’s current season.  Jonson turns moralist at the end as the judges mete out punishments left, right and centre.  We are admonished to look to our own conduct.  It is one thing to enjoy the vices of others, vicariously at the theatre, but quite another to indulge in those vices in our real lives. 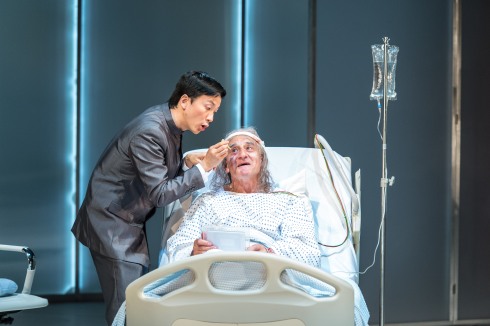 One response to “Urbane Fox”