I Can’t Believe It’s Not Butterfly

The evening begins with a brief classical piece, Perpetuum Mobile, with which Northern Ballet sets out its stall. This is the appetiser before the main event and it’s a joyous display of skill and a celebration of both the art form and the human body. It’s all about technique rather than any drama but it acclimatises me for what’s to come.

In a complete change of approach, Madame Butterfly begins with a highly stylised scene in which Butterfly, as a geisha, performs for three American naval officers. She’s a private dancer, a dancer for money – but one of the three men in white enters negotiations to marry her. So begins a romance. The fragile, shy Butterfly is coaxed out of her shell by Pinkerton (a dashing Javier Torres) in a lengthy pas de deux throughout which she runs the gamut of emotions. It’s a remarkable moment. By this point I am accustomed to hearing Puccini’s famous score without libretto, without soaring operatic voices, without voices at all, in fact!

The translation from opera to ballet works superbly. David Nixon’s choreography is expressive, blending and contrasting Western ballet with Japanese motifs. The set (by Steven Wilkins and Griz Pedley) is heavily influenced by Japanese prints (all the rage at the time when the piece is set), and the show is sumptuously lit by Alastair West.

Rachael Gillespie’s Butterfly is as delicate as her insect namesake. We see her come out of a cocoon of shyness, thanks to her love for Pinkerton, and we also see she has a sense of humour. At the piece’s climax, Butterfly’s suicide (hope that’s not a spoiler!) is ritualised and stylised much as the opening scene, but none the less powerful for it. An emotive and breath-taking performance.

There is excellent support from Ayami Miyata as Butterfly’s maid Suzuki, Ashley Dixon as Goro and Sean Bates as Sharples, who each bring characterisation to their roles in seemingly effortless and economical gestures. Mlindi Kulashe makes a bold impression as wealthy suitor Prince Yamadori.

The show is a feast for the eye and the ear. Puccini’s searing strains are well served by the Northern Ballet Sinfonia, under the baton of Nathan Fifield, with instrumentation taking the place of the voices. It all adds up to a magnificent demonstration, and a thoroughly engaging piece of story-telling. I am not a ballet aficionado but I was utterly absorbed and moved by this powerful and accessible production. 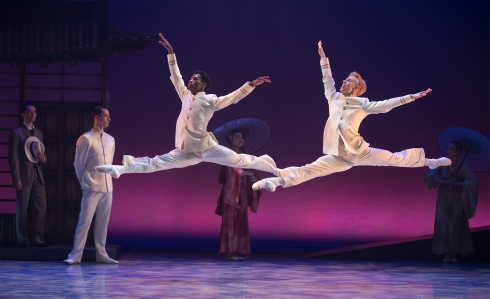 One response to “I Can’t Believe It’s Not Butterfly”