Putting the Wind Up

THE WIND IN THE WILLOWS

The winter touring production by Oddsocks this year is a new adaptation of Kenneth Grahame’s classic novel for children. Director and adaptor Andy Barrow, viewing the story through the prism of Oddsocks characteristic silliness and slapstick theatricality, manages to maintain the integrity of the plot and the well-known and much-beloved characters. As with his Shakespearean shows, the original is still very much with us but presented in this inventive and funny company’s inimitable style. There is something very English about Grahame’s novel, but then there is something particularly English about the Oddsocks sense of humour too.

Elli Mackenzie, as the programme says, ‘shows us her Mole.’ And what an endearing little thing it turns out to be. She also appears as other characters – I almost didn’t recognise her as a male policeman. The woman is a chameleon and an object lesson in characterisation and physical comedy. A co-founder of the company, she is also one of its strongest assets. It’s worth the ticket price (and more) to see her in action.

Fast becoming an Oddsocks favourite, Joseph Maudsley makes for a dapper Ratty, messing about on the water. Maudsley has an appealing, showbizzy-swagger, and a twinkle in his eye, topped off by his mellifluous singing voice – I could listen to him all night. Indeed the music for this production, composed by Lucy Ward, involves a good deal of a capella singing which is very pleasant, and a lot of fun. Audience participation is, of course, a key ingredient.

Also a lot of fun is Oddsocks stalwart, Andrew McGillan is Toad, the insufferable hedonist. He is a master of the larger-than-life performance and adept and quick-witted in his audience interactions. Seeing the show so early in its run (only the second ever performance) there are still some rough edges with transitions and technical cues; McGillan rises above it all, and such is the nature of the in-house style, glitches and hitches actually add to the charm. And it is very charming – especially in the first half. The second half is faster and more manic, and the full ingenuity of the foldaway set becomes apparent, when suddenly a steam train materialises!

Dom Gee-Burch returns to the fold to play Badger and others – a versatile character actor and musician, well-suited to the ongoing silliness. Newcomer Rosamund Hine fits seamlessly into proceedings, matching the quality of the old hands; I hope she becomes similarly embroiled in future Oddsocks productions.

But the idyll is being encroached upon – and here Andy Barrow brings this story from a bygone (or never-was) age bang up-to-date. The countryside, the seat of these animals’ pleasures, is under threat. Barrow switches Grahame’s class conflict with environmental concerns, and ‘fracking’ is not only a perfect Oddsocks word, it’s also a legitimate target in what is the company’s most political show so far. It says something about the state of the nation when this bunch of wacky funsters is compelled to comment on it. Barrow is clever enough not to descend into full-on agit-prop but the message is loud and clear. The countryside must be protected from destructive greed and the country as a whole must be protected from dangerous upper class oafs, the likes of whom we allow to become Mayor of London or Prime Minister. Like Toad, they need to be watched. For the public good, they need to be stopped. The show is like an antidote to Downton Abbey.

The message doesn’t overshadow the fun. There is something here for everyone. Plenty of action and silliness for the kids, peppered with risqué remarks for the adults. An alternative to the traditional pantomime, while using many panto techniques, this Wind in the Willows is a great laugh for all the family. The show is touring until February – catch it if you can! 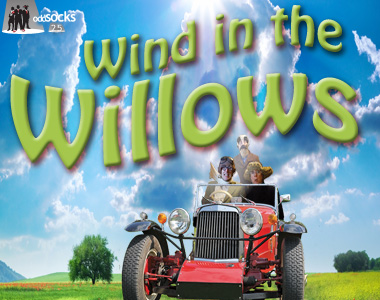 Novelist (Brough & Miller, sci fi, historical fantasy) Theatre critic http://williamstaffordnovelist.wordpress.com/ http://www.amazon.co.uk/-/e/B008AD0YGO and Actor - I can often be found walking the streets of Stratford upon Avon in the guise of the Bard! END_OF_DOCUMENT_TOKEN_TO_BE_REPLACED
This entry was posted on Saturday, November 29th, 2014 at 8:19 am and tagged with Andrew McGillan, Andy Barrow, Bridge House Theatre Warwick, Dom Gee-Burch, Elli Mackenzie, Joseph Maudsley, Kenneth Grahame, Oddsocks, Oddsocks Productions, review, Rosamund Hine, The Wind in the Willows, Toad and posted in Theatre Review. You can follow any responses to this entry through the RSS 2.0 feed.
« Tell: the Truth
Having It Large »

One response to “Putting the Wind Up”