In the same boat

THREE MEN IN A BOAT

The Original Theatre Company – who brought us the superlative Birdsong – return with their rip-roaring adaptation of Jerome K Jerome’s classic comic novel, a book which is one of the forerunners of modern British humour. Craig Gilbert’s script uses great swathes of Jerome, interspersed with quick-fire contemporary jokes and visual gags. The result is a delightful concoction for which the phrase laugh-a-minute is inadequate, and I am delighted to be able to see it again.

Three men walk into a pub. Two are there to support the third, who is to give a talk detailing their recent boating trip up the River Thames. The talk is abandoned in favour of a more physical re-enactment and so, using what there is at hand in the back room of the Elusive Pelican, the trio embark on a lively, inventive and witty piece of narrative theatre.

Alastair Whatley is J, the would-be lecturer, urbane and, I suspect, louche, while his companions (Paul Westwood as George and Tom Hackney as Harris) hurl themselves around the stage. Between them the three men populate the tale with a multitude of characters. At the piano is Nelly (Anna Westlake) who provides a silent-movie type soundtrack for the action sequences and accompaniment whenever they burst into music-hall songs (the one about cucumbers is a particular favourite).  In short, they are a skilled and talented quartet whose comic timing is nothing short of perfect.

Victoria Spearling’s artfully cluttered and cosy pub set makes a remarkable substitute for the banks of the Thames and Alan Valentine’s lighting is literally ‘spot-on’. Craig Gilbert directs his own script and doesn’t miss a trick. The performance is so detailed and fast-paced, you hardly dare blink in case you miss something. Thankfully, there are moments of quiet and the tone becomes bittersweet, rather than an unrelenting barrage of madcap silliness.

It’s a play about what three men did on their holidays, but there are undercurrents of other things: friendship, for one, and a relaxed way of looking at life that is rather appealing.   The evening is a holiday for the audience.

Do yourself a favour and get on board. Three Men in a Boat plays at the Belgrade until Saturday. Tickets are available from the box office on 024 7655 3055 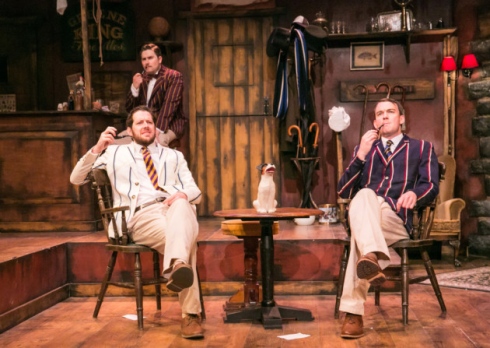 Put this in your pipe. Paul Westwood, Tom Hackney and Alastair Whatley

Novelist (Brough & Miller, sci fi, historical fantasy) Theatre critic http://williamstaffordnovelist.wordpress.com/ http://www.amazon.co.uk/-/e/B008AD0YGO and Actor - I can often be found walking the streets of Stratford upon Avon in the guise of the Bard! END_OF_DOCUMENT_TOKEN_TO_BE_REPLACED
This entry was posted on Thursday, October 16th, 2014 at 10:46 am and tagged with Alan Valentine, Alastair Whatley, Anna Westlake, Belgrade Theatre Coventry, Craig Gilbert, Jerome K Jerome, review, Three Men In a Boat, Victoria Spearling and posted in Theatre Review. You can follow any responses to this entry through the RSS 2.0 feed.
« Men, Mice, Dogs and Rabbits…
Wilde at Heart »