The latest jukebox musical on the block is a real nostalgia fest for fans of 1970s pop.  It strings together songs by hitmakers Nicky Chinn and Mike Chapman who wrote classic tracks for the likes of Suzi Quatro, Mud, and The Sweet.  With shows of this type you expect the links to songs to be tenuous at best and the plot to be contrived in such a way as to maximise the potential to include as much of the back catalogue as possible.  The problem with this particular piece of inconsequential fluff is it takes itself too seriously.  An injection of camp would make it more engaging.

The story, such as it is, tells of busker Mickey Block (‘my friends call me Buster’) who, fleeing from creditors, takes refuge in a mysterious museum of rock and roll, run by Crazy Max (Paul Nicholas in a cowboy hat).  Max sends Mickey back in time to 1972 in order to perform ‘two good deeds’, via a record booth that doubles as a portal through the fourth dimension.  Of course.  In 1972, Mickey falls in love – the implications and potential consequences of time-travel do not feature.  Apart from a stray reference to Facebook and Twitter, Mickey fits right in.  No one bats an eyelid.

Mickey (Aaron Sidwell) is a likeable sort who plays a mean guitar but the show really lifts when Carol (Suzanne Shaw) belts out Devilgate Drive.  Shaw’s voice is perfectly suited to this type of music; all of her numbers are a treat but for me the musical highlight is when Jodie (Micha Richardson) performs Better Be Good To Me with depth and emotional truth.

David Soames’s script is lazy.  When Alice (Louise English) tells neighbour Paul Nicholas (sans cowboy hat) that she is moving house because she cannot afford the mortgage, he launches into a rather dour rendition of Living Next Door To Alice, which includes the line “I don’t know why she’s leaving” as part of the refrain.  (Weren’t you listening, man? I would have shouted but I was too busy singing the Chubby Brown version: Alice?  Who the f— is Alice?)  Nicholas’s voice is deeper and richer than it was during his own pop heyday but, like the show as a whole (which he also directs) he needs to lighten up a bit.

The mostly youthful cast is a talented bunch who perform some excellent Flick Colby-style choreography by Rebecca Howell.  The Young Generation and Pan’s People spring to mind.  Too often the plot comes to a halt for yet another number – unlike ‘straight’ musicals (if I can call them that!) where songs develop story or reveal character, here the songs and the plot get in the way of each other.  There’s a completely unnecessary version of Lonely This Christmas played on a shoehorn.

Blockbuster is just not as much fun as it ought to be.  This pop musical has too few bubbles to keep it fizzy. 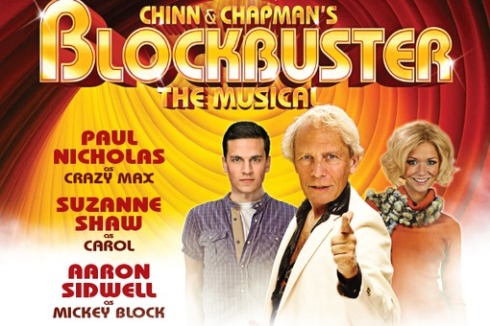 Novelist (Brough & Miller, sci fi, historical fantasy) Theatre critic http://williamstaffordnovelist.wordpress.com/ http://www.amazon.co.uk/-/e/B008AD0YGO and Actor - I can often be found walking the streets of Stratford upon Avon in the guise of the Bard! END_OF_DOCUMENT_TOKEN_TO_BE_REPLACED
This entry was posted on Wednesday, September 24th, 2014 at 9:55 am and tagged with Aaron Sidwell, Blockbuster, David Soames, Louise English, Micha Richardson, Mike Chapman, New Alexandra Theatre Birmingham, Nicky Chinn, Paul Nicholas, Rebecca Howell, review, Suzanne Shaw and posted in Theatre Review. You can follow any responses to this entry through the RSS 2.0 feed.
« Strings Attached
Play-Acting »

One response to “Flat Pop”