Verdi’s retelling of the story of Biblical king Nebuchadnezzar is given a pared-down treatment by WNO – in terms of staging; they don’t stint on the music. For the first act, the stage is bare and the company wear present-day clothes. It is as if we are watching the last run-through before the dress. This makes it difficult to differentiate between the Hebrews and the Babylonians but it does allow the score and the singing to hog the limelight. And such beautiful singing it is too, with a clutch of impressive soloists and a chorus that is nothing short of heavenly, Verdi’s music hits you like a wall of sound.

Kevin Short’s warm bass sets the ball rolling as high priest Zaccaria, and Robyn Lyn Evans’s plaintive tenor voice rounds out his Ismaele, despite him being dressed like a nerd, although at times he is a little drowned out in the ensemble singing. Baritone David Kempster’s Nabucco looks a bit like Bill Bailey as Gadaafi before his Lear-like descent into distraction and dishevelment while his evil daughter takes his throne. Kempster portrays Nabucco’s contrasting scenes excellently – there is top-drawer acting in this production to match the quality of the singing.

After the interval, Ben Baur’s set design really comes into play, with glitzy gold curtains and an illuminated dais that goes up and down as Nabucco proclaims his apotheosis. Director Rudolf Frey is more playful in this longer second half, but the evening belongs to soprano Mary Elizabeth Williams as the villainous Abigaille, who brings a good deal of humour to this melodramatic role.  One aria is delivered like a Las Vegas showgirl number, with men in balaclavas wielding ostrich feathers around Miss Williams in an unexpected moment of high camp.

Unsurprisingly the Hebrew slaves’ chorus, Va Pensiero, is the highlight – the number we’re all waiting for, and the superb WNO chorus do not disappoint.

It’s a Nabucco you warm to, as you grow accustomed to the staging and the outbreaks of hand-jive choreography (like directing traffic crossed with big-fish-little-fish push pineapple, shake the tree) – Personally I’d prefer a little more Cecil B DeMille and a little less TK Maxx. 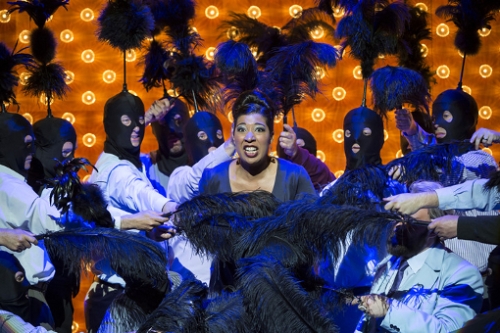 Give ’em some unexpected razzle-dazzle. Mary Elizabeth Wiliams as Abigaille.

Novelist (Brough & Miller, sci fi, historical fantasy) Theatre critic http://williamstaffordnovelist.wordpress.com/ http://www.amazon.co.uk/-/e/B008AD0YGO and Actor - I can often be found walking the streets of Stratford upon Avon in the guise of the Bard! END_OF_DOCUMENT_TOKEN_TO_BE_REPLACED
This entry was posted on Friday, June 20th, 2014 at 8:53 am and tagged with Ben Baur, Birmingham Hippodrome, David Kempster, Giuseppe Verdi, Kevin Short, Mary Elizabeth Williams, Nabucco, opera review, review, Robyn Lyn Evans, Rudolf Frey, WNO and posted in Opera review. You can follow any responses to this entry through the RSS 2.0 feed.
« Let’s Twist Again
G&S = Good and Silly »