Gurpreet Kaur Bhatti’s new play is set in the home of an Indian family in Birmingham.  At the heart and head of the family, formidable matriarch Jeeto (Sudha Bhuchar) clings to a dream of going ‘home’ to a vista of green fields, viewed from the ancestral verandah.  To this end she pushes son Pal (Rez Kempton) to keep the family shop established by her late husband open on Christmas Day, but Pal has other ideas.  He wants to sell the shop and set up his own business, a care home for elderly Asians in a refurbished pub.  Pal’s wife Liz (Lauren Crace) has been assimilated into the family and is more than happy to adopt the traditional role of the daughter-in-law as live-in domestic help, while Pal’s spirited sister Cookie (Zita Sattar) regrets having married and raised children, as she was expected to.  When cousin Reema arrives from India with her own views of independence and fending for herself, the family tensions that have been simmering like the ever-present pan of ‘chai’ boil over.

It’s an involving play, keeping on the right side of soap opera and melodrama, acted and presented naturalistically.  Director Roxana Silbert handles the events that put strain on family ties by keeping things simple and straightforward, allowing the characters to spark off each other.  The script is very much a conventional one and does not need gimmicks or flashy transitions to dress it up.

Jamie Varton’s set has the audience as three of the walls of the house, giving an intimate setting complete with running tap water and a working gas hob, grounding the play in the realness of its subject matter.

The cast is excellent with Bhuchar and Sattar standing out as mother and daughter with contrasting temperaments.  Kempton and Crace also do well in their scenes of marital strife with the latter especially touching as the white girl who left her own family behind for love.  Neil D’Souza is good fun as Cookie’s hapless husband, Major, ostensibly a bit of a prat until Pal’s plans go awry, and Preeya Kaludas impresses with her portrayal of Reema’s decline from idealism to destitution.

The spectre (or should that be ‘spirit’?) of alcohol looms large in the family’s past and present, and the notion of Pal trying to establish an Asian care home in an old English pub symbolises the difficulties of trying to graft two cultures together to make something new…

There are some very funny lines, many of which come from salon owner Cookie who is not opening on New Year’s Day because ‘ you can’t do a Brazilian with a hangover.’  There is also a lot of heart and no shortage of tension in this story of family dynamics and the clash between ambition and tradition.  You may not understand the odd word or line of Punjabi with which the dialogue is peppered, but you don’t need to.  The universal truths of human relationships speak loud and clear.

Dramatically, Khandan is old-fashioned and sturdy but above all it’s an engaging and satisfying evening’s entertainment. 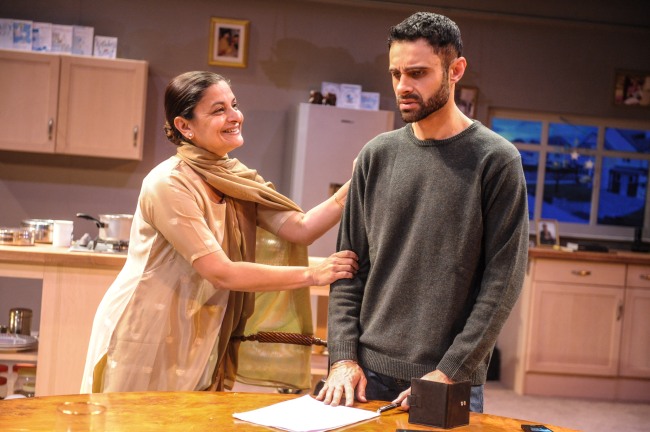 Novelist (Brough & Miller, sci fi, historical fantasy) Theatre critic http://williamstaffordnovelist.wordpress.com/ http://www.amazon.co.uk/-/e/B008AD0YGO and Actor - I can often be found walking the streets of Stratford upon Avon in the guise of the Bard! END_OF_DOCUMENT_TOKEN_TO_BE_REPLACED
This entry was posted on Wednesday, May 28th, 2014 at 1:32 pm and tagged with Gurpreet Kaur Bhatti, Jamie Vartan, Khandan, Lauren Crace, Neil D'Souza, Preeya Kalidas, review, Rez Kempton, Roxana Silbert, Sudha Bhuchar, The REP Birmingham, theatre review, Zita Sattar and posted in Theatre Review. You can follow any responses to this entry through the RSS 2.0 feed.
« What you talking about, Willis?
Captivating »