A railway platform is the setting for Welsh National Opera’s current production of Puccini’s version of the classic French novel.  The chorus, in stylish business suits, are all commuters.  Des Grieux is similarly attired, a business man rather than a young student.  Yellow lines edge the stage – the kind you’re supposed to stand well behind.  It’s symbolic of a problem with this setting that keeps us at a remove from this world.  We are observers and sometimes it’s too voyeuristic for comfort.

It’s not a good fit of setting and content.  I don’t buy the chorus of commuters who sing chummily as if they’re a bunch of locals in a pub but behave like people do on trains, bustling about like ants intent on their individual business.  Manon is depicted as a victim from the get-go.  Exploited by her brother in the most horrible way, she is little more than a sex slave.  She might enjoy the trappings of Fellini’s La Dolce Vita but she is a kept woman and possibly a drug addict.   Women in this world are objects, chattel, possessions.  Exotic pets.  It’s a misogynistic place.  Des Grieux spots Manon when she is wrapped up in a red mackintosh and masked by sunglasses – this is the woman with whom he falls desperately in love.

As Des Grieux, Gwyn Hughes Jones is a more mature figure than the love struck youth I picture.  All the greater is his desperation because of this.  And Hughes Jones has a searing tenor that makes every note of his arias compelling.  Chiara Taigi’s Manon has the setting working against her: she snorts a line of cocaine, rolls over and off a sofa, and still keeps perfect control of her voice with all its dynamics and colours.

Under Lother Koeniga’s baton, Puccini’s score reaches out to us through the distancing effects of the staging.  Act 3 begins with some of his most beautiful music before a dramatic and disturbing scene in which some women, including Manon, are paraded around with their hands high above their heads like pieces of meat hanging from hooks.  They are being punished for fulfilling the roles imposed on them by the men in this horrible society.

The final scene is presented like an out-of-body experience.  Des Grieux and a Manon-a-like sit on a bench on the railway platform, like strangers, while Manon herself stands apart for her last aria, before walking off the platform.  Apart from the singing it was all a little too dispassionate for me, a little too stark.

Sounding wonderful, thanks to a top class cast and marvellous orchestra, this Manon is sometimes visually disturbing but a little too removed, however clever the ideas. 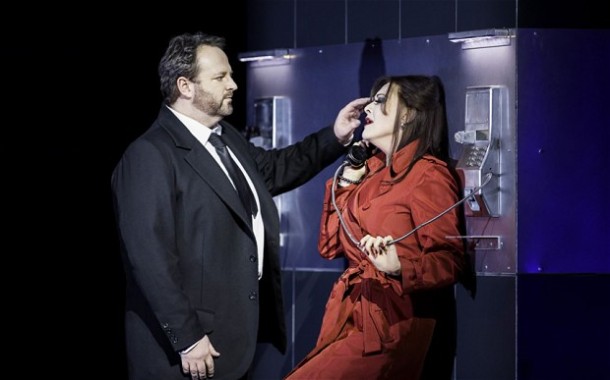 Novelist (Brough & Miller, sci fi, historical fantasy) Theatre critic http://williamstaffordnovelist.wordpress.com/ http://www.amazon.co.uk/-/e/B008AD0YGO and Actor - I can often be found walking the streets of Stratford upon Avon in the guise of the Bard! END_OF_DOCUMENT_TOKEN_TO_BE_REPLACED
This entry was posted on Thursday, March 6th, 2014 at 9:45 am and tagged with Birmingham Hippodrome, Chiara Taigi, Gwyn Hughes Jones, Lother Koeniga, Manon Lescaut, opera, Puccini, review, Welsh National Opera, WNO and posted in Opera review. You can follow any responses to this entry through the RSS 2.0 feed.
« Lame
Taking the Piss »