Pickwick From A Distance

An ambitious project: to bring Charles Dickens’s rambling, episodic novel (originally a serial) to the stage.  But it has been done magnificently with regard to Nicholas Nickleby, so why not give it a go?  Unfortunately, The Pickwick Papers lacks the scale and the scope of that other book and, most crucially, it lacks drama.  So, what we get with Nicola Boyce’s adaptation is a series of scenes of little consequence involving characters that veer towards caricature.

Ian Dickens (some relation?) directs a cast of faces familiar from his other productions and pretty much gives them an easy ride.  Rebecca Wheatley gives a star turn as Mrs Leo Hunter performing a poem set to music about an ‘expiring frog’ – this characterisation contrasts effectively with her other role as the shy Miss Wardle.  David Callister is enjoyable as conman Jingle, inhabiting the costume and the vernacular with ease.  Poppy Meadows is underused – very funny as Mrs Bardell.  Dean Gaffney is well within his comfort zone as affable manservant Sam Weller – a pity he doesn’t get to flex the comedic muscle we saw earlier this year in Murder in Play.  Daniel Robinson and Scott Grey are the effeminate, giggling, shrieking ninnies Mr Winkle and Mr Snodgrass – they get the best scene in terms of action when poor Winkle finds himself embroiled in a duel thanks to the misconduct of Callister’s Jingle.

On the whole, the cast is very good and looks good in the costumes.  I think part of the problem is the set.  Most of the action takes place on a rostrum but this is set so far upstage it adds further distance between the actors and the audience beyond that provided by the fourth wall.  It is very difficult for them to engage with us and us with them, being so far removed from each other – my seat was fifth row centre and I felt like I needed binoculars.  Often the stage is crowded with people with their backs to us, further shutting us out. A disembodied voice narrates passages to cover scene changes, keeping us at a distance yet again rather than addressing us directly.

Also, the running time is not borne out by the content.  The story, such as it is, is too flimsy to sustain interest for almost three hours.  I found my mind wandering, unable to focus on some of the verbiage – Pickwick, nicely played by John D Collins – is a garrulous old thing but the script is in need of editing.

What should be a delightful, diverting way to pass an evening, becomes something of an endurance test.  It’s like trying to have a five-course meal in a sweet-shop: delightful at first but ultimately unsatisfying and lacking in nutrients. 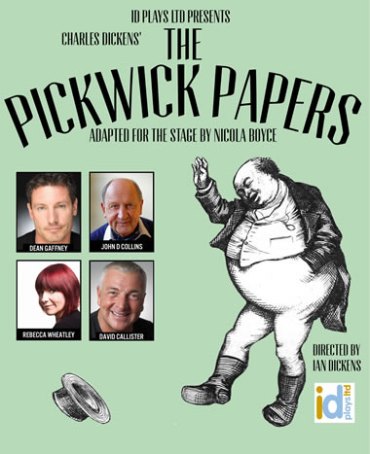 Novelist (Brough & Miller, sci fi, historical fantasy) Theatre critic http://williamstaffordnovelist.wordpress.com/ http://www.amazon.co.uk/-/e/B008AD0YGO and Actor - I can often be found walking the streets of Stratford upon Avon in the guise of the Bard! END_OF_DOCUMENT_TOKEN_TO_BE_REPLACED
This entry was posted on Thursday, December 5th, 2013 at 9:57 am and tagged with Charles Dickens, Daniel Robinson, David Callister, Dean Gaffney, Ian Dickens, John D Collins, Malvern Theatres, Poppy Meadows, Rebecca Wheatley, review, Scott Gray, The Pickwick Papers, theatre review and posted in Theatre Review. You can follow any responses to this entry through the RSS 2.0 feed.
« Lacking in Spirit
Stark Raving »

One response to “Pickwick From A Distance”