Oddsocks’s winter production this year set sail in Wolverhampton and while some first night ‘issues’ are to be expected and indeed take place, they in no way detract from the enjoyment of this superbly hilarious piece.  But what does set it apart from other shows by this remarkable company is that adapter/director/genius Andy Barrow lets the adventure of the original story have room to breathe.  Yes, all the hallmarks of Oddsocks comedy are there but there is also drama and tension.  The show shifts gear and then shifts again, with jokes and ‘business’ woven into the action.  Characterisations that begin as broad and cartoony become more rounded.  It’s very well handled indeed.

We begin at the Admiral Benbow inn where a rather earnest Jim (Gemma Aston) dreams of a more exciting life.  He soon finds himself embroiled with pirates and a hunt for hidden treasure.  Aston is the sober centre of the piece, the straight man to the lunacy that surrounds her – this is not to say she isn’t also very funny.  She is, in fact, a barrel of laughs.

Andy Barrow is a scream as Jim’s mother, prone to fainting and hungry for male attention.  This is the dame to Aston’s principal boy, and while the show includes some overtly pantomime features, it soon sets a course for the more dramatic.

Andrew McGilligan impresses and delights with his physical skills and quick wit.  His Squire Trelawney is a hoot.  Joseph Maudsley is wonderful as Blind Pew and Doctor Livesey, while Dom Gee-Burch demonstrates his range of comic characters as Captain Smollett, Billy Bones, Ben Gunn and most other people.  This trio have become Oddsocks regulars, Andy Barrow’s own set of three stooges.  They are very, very funny men.

The set is ingenious and Sarah Oxley’s costumes are beautiful.  Barrow directs some top drawer comic action, aided by Amed Hashimi’s fight choreography.  An early knife fight is absolutely superb.  A later sword fight is organised chaos.  The second act opens with a danse macabre to tickle your funny bones.  There is a Stomp tribute and Cap’n Flint has to be seen to be believed.

In this chest, brimming with treasure, there are only a couple of dud coins.  The ambient sound effects need to be turned down in some scenes.  Ben Gunn is crying out for a comedy beard.

This is perhaps Oddsocks’s most rounded production to date.  I hope to board it again later in its nationwide tour. 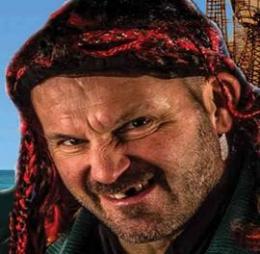 It’s the time of year to get out your Long Johns.

Novelist (Brough & Miller, sci fi, historical fantasy) Theatre critic http://williamstaffordnovelist.wordpress.com/ http://www.amazon.co.uk/-/e/B008AD0YGO and Actor - I can often be found walking the streets of Stratford upon Avon in the guise of the Bard! END_OF_DOCUMENT_TOKEN_TO_BE_REPLACED
This entry was posted on Wednesday, November 20th, 2013 at 12:34 am and tagged with Amed Hashimi, Andrew McGilligan, Andy Barrow, Arena Theatre Wolverhampton, Dom Gee-Burch, Gemma Aston, Joseph Maudsley, Oddsocks, review, Robert Louis Stevenson, Sarah Oxley, theatre review, Treasure Island and posted in Theatre Review. You can follow any responses to this entry through the RSS 2.0 feed.
« Queen of Denial
Doubling up »