A Bird in the Hand

Sarah Brigham directs her first production for the phoenix-like Derby Theatre, choosing for her debut Lawrence Till’s adaptation of Barry Hines’s famous novel, A Kestrel For A Knave.  If this show is an indication of the quality of work we can expect, I may as well set up residence in the auditorium.

Simple staging creates the world of Billy Casper.  Bits of rooms, shops and his school fly in and out, while a tight ensemble formed from professional actors and kids recruited from the community, perform the characters who taunt, bully and torment poor Billy at every turn.  Barney George’s design evokes the period – who could forget the geometric patterns of a 1960s school curtain? – with hints at pitheads and poverty.  Projections show us the countryside that abuts the town – at one point, giant stalks of wheat dwarf the characters, symbolically reminding us of the power and supremacy of nature.  Ivan Stott’s music supports the moods and the action with a cinematic quality.

Billy hasn’t much going for him.  He escapes into dramatic reconstructions of Desperate Dan comics.  He nicks from the shopkeeper who employs him as a paperboy.  He is bullied relentlessly by older brother Jud (a brutish Jimmy Fairhurst), blunted by the hardship of his working life down t’pit.  Mother (Samantha Seagar) is ineffectual – Nowadays you’d hope social services would swoop down on them like a – well, like a hawk.

At school he faces aggression from John Holt-Roberts as MacDowall, and disdain from Thomas Pickles as Tibbut.  Pickles gives us an electrifying monologue about wellies and tadpoles, enchanting us as much as his classmates.  It is remarkable how well the cast gels together – apart from the most obvious differences in height and age, they operate as a convincing entity, populated by individual characterisations.

Paul Clarkson’s headmaster Gryce is a delicious tyrant, exposing the brutality of the education system, and the lack of provision for boys like Casper, serving as a warning that a return to so-called ‘traditional values’ is not going to work.  I also loved Andrew Westfield as the pompous PE teacher, another representative of an institution that cannot support Casper’s needs.

The show belongs to Sam Jackson.  His portrayal of Billy is heartfelt and heartbreaking.  With his youthful energy and almost elfin, Peter Pan-like features, he utterly convinces as a 15 year old urchin.  He brings a physicality to the role, not just in his comic-book dramatisations but also in Billy’s moments of stillness.  Billy’s enthusiasm for and expert knowledge of training the kestrel he rescued surprises teacher Mr Farthing (a sympathetic John Elkington).  No one is a write-off, the play says.  Even someone like Billy Casper has potential for beauty, creativity and can make a contribution. There is hope for us all and it is a tragedy if that potential is not nurtured and encouraged to flourish.

Very cleverly, the production works on an allegorical level.  Sarah Brigham has selected this particular play to tell us that there is hope for theatre in Derby, despite its chequered past.  If Kes is anything to go by, Derby Theatre will soar very high indeed. 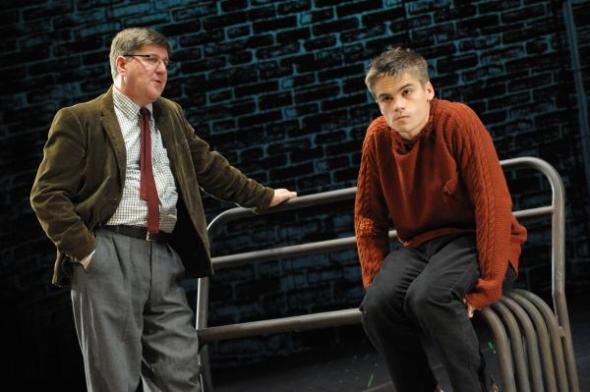 Novelist (Brough & Miller, sci fi, historical fantasy) Theatre critic http://williamstaffordnovelist.wordpress.com/ http://www.amazon.co.uk/-/e/B008AD0YGO and Actor - I can often be found walking the streets of Stratford upon Avon in the guise of the Bard! END_OF_DOCUMENT_TOKEN_TO_BE_REPLACED
This entry was posted on Wednesday, September 18th, 2013 at 9:10 am and tagged with A Kestrel for a Knave, Andrew Westfield, Barney George, Barry Hines, Derby Theatre, Ivan Stott, Jimmy Fairhurst, John Elkington, John Holt-Roberts, Kes, Lawrence Till, Paul Clarkson, review, Sam Jackson, Samantha Seager, Sarah Brigham, Thomas Pickles and posted in Theatre Review. You can follow any responses to this entry through the RSS 2.0 feed.
« Smile; you’re in Candide Chimera!
Dim and Dimmer »

2 responses to “A Bird in the Hand”