Performed less often than some other Shakespeare plays, All’s Well is a ‘comedy’ or a ‘problem play’.  If we take ‘comedy’ to mean a drama in which characters overcome their problems (as opposed to ‘tragedy’ where the problems overcome the characters) then it certainly fits the category.  It remains a problematic play in my view because of its shortcomings: plot devices familiar from other plays are strung together with none of the impact of, say, the fooling of Malvolio, the controversy of the wedding rings in Merchant.

But that is not to say All’s Well is without merit.  There is much to engage and divert and I would argue the two main female roles contain much of the play’s appeal.  As the Countess, Charlotte Cornwell is stately and generous in spirit, in a seemingly effortless performance, grand without being condescending, sensitive and yet somewhat reserved.  Most of the wheels of the plot are put in motion by Helena in an engaging and touching performance by Joanna Horton.  Helena is a fairytale heroine who goes through trial and tribulation and gets what she wants by guile and determination.  When the object of her affection (Bertram) leaves her behind, her heartbreak is heartbreaking.

The key to All’s Well is the fairytale aspect of the story.  The design of this production, by Katrina Lindsay, works best when it alludes to the storybook nature of the plot.  For my tastes, the soldiers in their dress uniform are more fitting than when they appear in desert camouflage and white t-shirts like some kind of stripper troupe.  The ailing King of France (the always excellent Greg Wise) is hooked up to a drip, an oxygen tank and an ECG machine (or whatever it is) – these kinds of touches are at odds with the other-worldliness of the plot’s logic.  Similarly the see-through box which slides on and off to indicate changes of location is unnecessary.  Thankfully, the production is comparatively short on gimmicks, although what there are, jar horribly.

The show begins with a loud assault of music and lighting.  Parolles dances on a table wearing a Leigh Bowery-type gimp mask.  Mercifully, the production calms down with some freeze-frames, snapshots that set the scene for a funeral. Director Nancy Meckler appears to have reined in some of her excesses – where this production works best is when the staging is at its simplest, and the actors are allowed to do their jobs without the production aesthetic getting in the way.  The soldiers remain a bit of a worry as the play goes on.  The second half begins with an ill-advised movement sequence in which they punch invisible enemies.  They go off, leaving Bertram to duff up thin air.  I found it laughable.

Ah, yes, Bertram.  The always watchable and likeable Alex Waldmann has his work cut out to give this romantic anti-hero any kind of redeeming qualities.  He’s physically attractive but condescending, sarcastic and self-serving.  In brief: he’s a prick. Poor Helena must have been dazzled by his charisma.  Right at the end, when he is shamed into accepting their marriage, Bertram’s conversion is tricky to handle.  The lights fade with Helena triumphant, and Bertram close to tears, resigned to his fate.  All has not ended well for him, which I think belies the optimism of the title, the optimism that has kept Helena on course to get what she wants come what may.  I would have preferred some kind of epiphany to fuel his sudden, albeit qualified, declaration.  Within the fairytale context, this kind of transformation is perfectly fitting.

I was also uncomfortable with the handling of Parolles.  Jonathan Slinger gets his nastiness across but there needs to be more to enjoy in his bombast and braggadocio if we are to feel something for him when he sees the error of his ways.  He is tricked into betraying military secrets and insulting his fellow soldiers but the desert storm setting is a little too much like those disgraceful photographs of American soldiers humiliating captives to make the scene anywhere near rip-roaring.  It leaves an unpleasant aftertaste – as does the production as a whole.  If you’re going for bittersweet, you can’t forget to add the sweet. 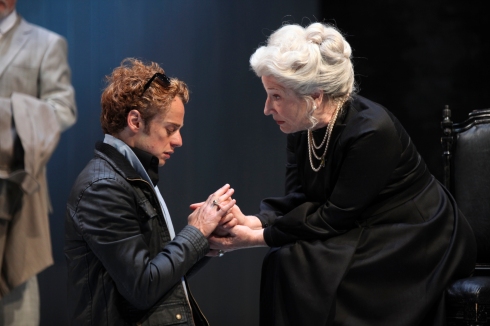 Novelist (Brough & Miller, sci fi, historical fantasy) Theatre critic http://williamstaffordnovelist.wordpress.com/ http://www.amazon.co.uk/-/e/B008AD0YGO and Actor - I can often be found walking the streets of Stratford upon Avon in the guise of the Bard! END_OF_DOCUMENT_TOKEN_TO_BE_REPLACED
This entry was posted on Thursday, August 1st, 2013 at 10:31 am and tagged with Alex Waldmann, All's Well That Ends Well, Charotte Cornwell, Greg Hicks, Joanna Horton, Jonathan Slinger, Katrina Lindsay, Nancy Meckler, review, RSC, William Shakespeare and posted in Theatre Review. You can follow any responses to this entry through the RSS 2.0 feed.
« Life’s buffets
Play of Thrones »