A Funny State of A Fez

THE COMEDY OF ERRORS

For their summer tour, Oddsocks Productions have applied their distinctive style to one of Shakespeare’s earliest works, a play that is already very funny before you Oddsocks it up.  Director/adaptor Andy Barrow leads a team of five new faces and it soon becomes apparent that he picks his cast members well.  This crazy, talented bunch are more than up to the challenges presented in an Oddsocks performance – not least of which is playing musical instruments.

With only six actors (an increase on the usual five) certain things have to be excised from the script.  Old Egeon is nowhere to be seen – he is the father of one set of twins and his arrest and threatened execution adds tension to the play.  But this is Oddsocks.  They even did Hamlet as a comedy.  With the jeopardy removed, this production keeps things light, focussing on the farcical elements of the plot and emphasising the slapstick and physical comedy.  You don’t miss Egeon at all.

Also omitted is Adriana’s sister Luciana, a rival for the affections of the twin of Adriana’s husband (it’s complicated).  Instead of missing her out completely, a woman on the front row is addressed and questioned – for an Oddsocks production, the show is comparatively light on audience participation.

But never mind what we don’t get.  What we do get is an evening of superlative comedy.  The setting is vaguely Turkish; the cart and costumes are looking good, giving the production a unified feel.  There are enough fezzes knocking around for a Sons of the Desert convention. Andy Barrow plays both Dromios, differentiating them by accent, displaying a physical agility that belies his middle-age; as Dromios’ masters Antipholus, Gavin Harrison is a real find; a splendid character actor in the Oddsocks tradition – reactions and expressions are heightened but thought processes are written all over his face.  Anna Westlake’s Adriana is commanding and shrewish but spirited and likeable all the same.  Dominic Gee-Burch and Marlon Soloman add to the cavalcade of silly characterisations, clearly enjoying themselves and proving themselves as versatile comic players.  Also impressive, in this impressive group, Miranda Heath is superb as the Abbess, a Courtesan and an Officer of the law.  Some of the changes are very quick.  At other times, the cast vamp on their instruments through a selection of familiar numbers: Ghost Town by the Specials and Madness’s House of Fun are particular favourites.

The show gives us a chorus of nuns who re-enact the shipwreck that split the two sets of twins when they were infants, before bursting into a surprise Diana Ross number.  Sister Act was never this silly.  But as well as these flashes of madness (and Madness) Shakespeare’s play is still very much in evidence.  The dialogue about Nell, a spherical kitchen maid, is delivered intact and remains one of the funniest bits of patter – Shakespeare invents Abbott and Costello’s entire act.

All the way through, with two actors playing both pairs of twins, I was thinking, how will they do the final reunion?  Brilliantly, is how they do it.  I did not see it coming, even though there are hints throughout the performance.  It all comes together for an hilarious denouement, proving my assertion that Andy Barrow is an unalloyed genius.  His approach to Shakespeare is both irreverent and respectful.  He understands the theatrical engine of the play and the theatrical traditions that underpin it, and yet somehow manages to give us a production that is distinctively his own. 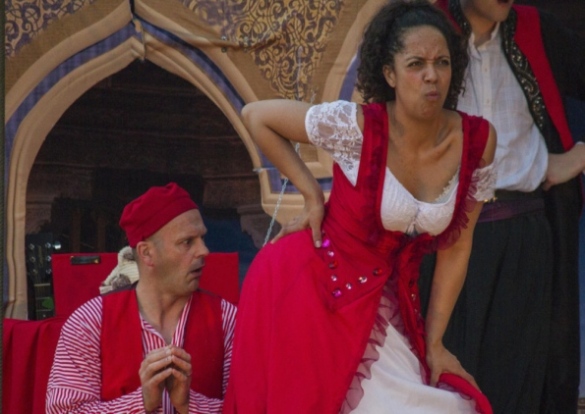 Novelist (Brough & Miller, sci fi, historical fantasy) Theatre critic http://williamstaffordnovelist.wordpress.com/ http://www.amazon.co.uk/-/e/B008AD0YGO and Actor - I can often be found walking the streets of Stratford upon Avon in the guise of the Bard! END_OF_DOCUMENT_TOKEN_TO_BE_REPLACED
This entry was posted on Tuesday, July 23rd, 2013 at 9:05 am and tagged with Andy Barrow, Anna Westlake, Derby Theatre, Dominic Gee-Burch, Gavin Harrison, Marlon Soloman, Miranda Heath, Oddsocks Productions, review, The Comedy of Errors, William Shakespeare and posted in Theatre Review. You can follow any responses to this entry through the RSS 2.0 feed.
« Storms and Teacups
Life’s buffets »