An old man in a nursing home reminisces about the past.  He is visited by his daughter but is paranoid that members of staff are out to get him and has dreams, tortured collages of memories.  He even has an imaginary friend with whom he mocks other inmates.

What is remarkable about Hotel Teatro’s telling of this tale is that in this piece, characters only speak lines from Shakespeare’s The Tempest.   Director Daniel Tyler has dismantled the original play and cut-and-pasted dialogue and phrases to fit this new narrative.  For the most part, it works very well but I found myself forever pulled out of my engagement with the action as I worked out which character originally said which line and in what context.

The company of five actors are a skilled bunch, some of them more at ease with the language than others.  Corey Campbell is excellent as the Carer, keeping a naturalistic tone as he tends to old Prospero, and adopting a more dramatic attitude when he comes over all Caliban-like in the old man’s paranoid fantasies.  Alice Coles is also very strong as dutiful daughter Miranda, visiting her old dad.  She reminds me of a young Jane Asher.  She doubles up as her own mother in a couple of memory sequences: we see how Prospero met and married his wife and also, later on, how he lost her.  It’s like the first ten minutes of Disney’s Up.

The ‘real-life’ scenes are interspersed with some effective movement sequences, directed by Christopher Worrell, with Prospero conjuring up these images by twisting his blanket or brandishing his staff (well, a walking stick!).  Worrell also appears as imaginary friend Ariel, a graceful, other-worldly presence.   James MacNaughton offers solid support as a ‘Patient’ and also a Trinculo-like figure, a rowdy cook who slips Prospero swigs from his hip flask every now and then. Andy Brownlie’s Prospero is a likeable old soul – reminiscing over a photograph album, he takes out a picture of his late wife, “How sharp the sting of this remembrance is!” he says, in one of the piece’s simpler and more touching moments.

Ultimately, the play comes across as more clever than it is powerful.  The ensemble works very well with very little in the way of staging.  Excellent sound design from John Roddy creates the atmosphere of the naturalistic scenes as well as the stylised sequences, proving the low-budget, plastic chair theatre can be richer in ideas and execution than shows privileged to have bigger budgets.

I would have liked to see more extremes in old Prospero: his anger, his confusion, his sentimentality, all need sharper contrasts – the unpredictability of the moods of the elderly can be alarming and heartbreaking, and perhaps I would have been drawn deeper into his plight and away from my own compulsion to identify the provenance of every line they said. 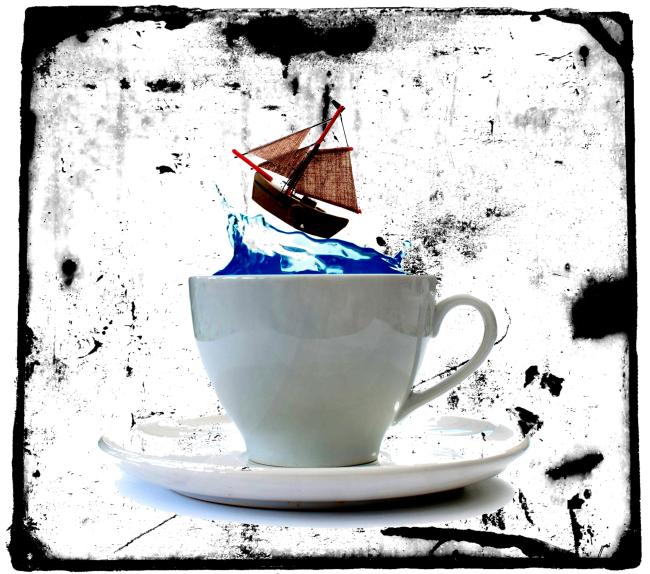 Novelist (Brough & Miller, sci fi, historical fantasy) Theatre critic http://williamstaffordnovelist.wordpress.com/ http://www.amazon.co.uk/-/e/B008AD0YGO and Actor - I can often be found walking the streets of Stratford upon Avon in the guise of the Bard! END_OF_DOCUMENT_TOKEN_TO_BE_REPLACED
This entry was posted on Saturday, July 20th, 2013 at 8:01 am and tagged with A E Harris Building, Alice Coles, Andy Brownlie, Christopher Worrell, Corey Campbell, Daniel Tyler, Hotel Teatro, James MacNaughton, John Roddy, review, Tempestory, The Tempest, William Shakespeare and posted in Theatre Review. You can follow any responses to this entry through the RSS 2.0 feed.
« Chilling on a Summer Night
A Funny State of A Fez »