The Farce is Strong in this One

Michael Frayn’s farce-within-a-farce is currently doing the rounds in this production from the Old Vic.  For those that have yet to come across this extremely funny piece, it gives us three glimpses of life with a touring production of creaky old farce, Nothing On: the first act shows us a torturous rehearsal, the night before they open; the second act takes place backstage during a matinee on the tour; and the third shows us what we saw rehearsed ‘performed’ to an audience several weeks in…

Neil Pearson is superb as Lloyd the frazzled director, whose anger and sarcasm increase in equal measure as time runs out before opening night.  Maureen Beattie plays it broad as the fading star in the role of the charwoman – in fact the entire company demonstrates skill at the larger-than-life performances of their on-stage roles.  Thomasin Rand is suitably dim as the starlet in her underwear and David Bark-Jones is equally outspoken and inarticulate as Garry Lejeune.  It is when they drop out of character that they drop into full-on ‘luvvie’ mode.  Sasha Waddell is the epitome of this luvvieness, the gossipmonger of the group.  Chris Larkin’s Freddie is a hilarious portrayal of a sweet but dim actor – the physical comedy of Larkin and Bark-Jones, throwing themselves around with trousers around ankles or shoelaces tied together is astonishing.  Geoffrey Freshwater is a hoot as the dipsomaniac playing the burglar, and Danielle Flatt is appropriately wound-up and emotional as stage manager Poppy. Finally there is an enjoyable Simon Bubb as Tim the general factotum, handyman, understudy and DSM –without whom these no-hopers would have no show at all.

In the second act, when most of it is performed in frantic dumb show, the notion of timing being everything in comedy could not be more prominent.  The slapstick element of farce joins the others (doors slamming, trousers dropping, girls in underwear) in this manic sequence that must be a bugger to learn.  I have seen it done tighter but the mad scramble to keep the show going and stop the cast from killing each other, was still well-played and very funny.

By the third act, the wheels have really come off Nothing On. The production’s descent into chaos is irrevocable.  The cast attempt to improvise their way out of it when things go wrong, and it becomes the stuff of actors’ nightmares.  Just like it takes a certain skill to play a piano as badly as Les Dawson, playing ‘bad actor’ is also more demanding than you might think.  This company – the real life company, I mean, not the on-stage one! – has that skill in abundance.

Director Lloyd steps in – or rather climbs in through the window – as a supernumerary stand-in burglar, and the cast all turn to him for guidance.  As well as being very clever theatrically, and demanding high levels of comedic ability, the play also reveals much about the human condition.  There is a will to create but the flaws in our natures mean our efforts are doomed to failure at worst, or mediocrity at best.  Our selfish impulses jeopardise the efforts of the group.  There is no director to guide our actions.  The best we can hope is to put our differences aside and work together before that final curtain comes shuddering down. 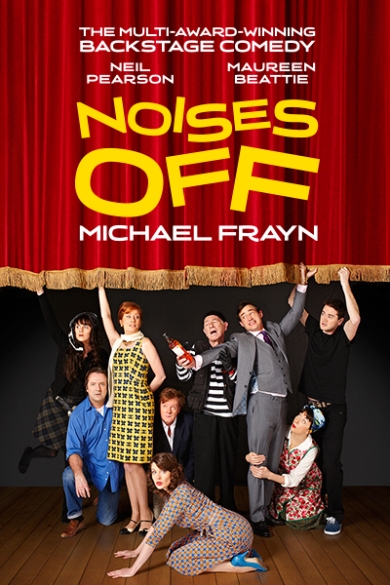 Novelist (Brough & Miller, sci fi, historical fantasy) Theatre critic http://williamstaffordnovelist.wordpress.com/ http://www.amazon.co.uk/-/e/B008AD0YGO and Actor - I can often be found walking the streets of Stratford upon Avon in the guise of the Bard! END_OF_DOCUMENT_TOKEN_TO_BE_REPLACED
This entry was posted on Tuesday, June 25th, 2013 at 8:29 am and tagged with Chris Larkin, Danielle Flett, David Bark-Jones, Geoffrey Freshwater, Maureen Beattie, Michael Frayn, Neil Pearson, New Alexandra Theatre Birmingham, Noises Off, Sasha Waddell, Simon Bubb, The Old Vic, Thomasin Rand and posted in Theatre Review. You can follow any responses to this entry through the RSS 2.0 feed.
« Double-dealing and Double Meanings
Big Babies »

One response to “The Farce is Strong in this One”