A FUNNY THING HAPPENED ON THE WAY TO THE FORUM

The plays of ancient Roman Plautus are a cornerstone of Western comedic tradition.  The works have influenced Shakespeare, among others, and more recently have been rediscovered and re-imagined by 20th century writers and dramatists.  In England, we got Up Pompeii with the wonderful Frankie Howerd as the wily slave protagonist.  In the States, composer Stephen Sondheim created the musical A Funny Thing Happened on the Way to the Forum, which although not as riddled with innuendo as its British counterpart, has its fair share of bawdy humour and suggestive jokes.

Tiffany Cawthorne and Keith Harris (not that Keith Harris) direct this colourful and lively production with a hard-working cast that for the most part hits all the right notes.  The show begins with its most well-known number Comedy Tonight! and a sequence of organised chaos as the chorus prepare for the show proper to begin.

Pat Brown and Jo Thackwray’s costume designs are perfect – so is the bright and beautiful set (Phil Parsons and Keith Harris – again, not that Keith Harris).

Nick Owen is wily slave Pseudolus, desperate to buy his freedom.  In collusion with his master’s son, Hero (Michael Jenkins) he contrives to get the boy the girl of his dreams in exchange for his emancipation.  Owen is thoroughly in charge of all the machinations and consequences, establishing an easy rapport with the audience with his asides, managing to be camp without being effeminate (that is left to the eunuchs!).  Jenkins is adorable as naive young Hero, pulling off with ease some of Sondheim’s not-so-easy solos.

The object of Hero’s infatuation is airhead courtesan Philia – a consistently funny turn from Laura Poyner, with a beautiful singing voice.  She and Jenkins are wholly credible as the young lovers, despite the training she has received that makes her react like a fembot to, um… stimuli.

There is strong support from Toby Davis as Lycus, the proprietor of the house of ill repute, and Dave Rodgers as dirty old man Senex, although perhaps this latter could do with being a little louder in some scenes.  Senex’s wife Domina is a Christine Hamilton of a woman, a self-assured battleaxe played with aplomb by Annie Harris.  Butch braggart Captain Miles Gloriosus is a delight of a characterisation by Tom Fitzpatrick, but the out-and-out star turn comes from James David Knapp as hysterical slave Hysterium.  He makes a strong impression from the start and, as the character becomes embroiled in the increasingly farcical twists and turns of the plot, gets better and better.  It’s a nuanced yet broad performance, perfectly pitched for this type of material.

The action becomes more and more convoluted before descending into moments of pure farce with the cast running on and off in all directions.  It’s a difficult scene but the company keep the energy levels high.  Never less than amusing, and very often laugh-out-loud funny this is an excellent night out, thanks to the strength of the material and the calibre of the company. 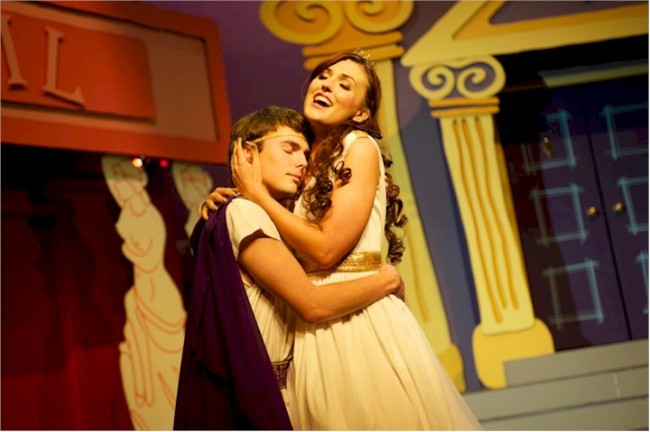 Novelist (Brough & Miller, sci fi, historical fantasy) Theatre critic http://williamstaffordnovelist.wordpress.com/ http://www.amazon.co.uk/-/e/B008AD0YGO and Actor - I can often be found walking the streets of Stratford upon Avon in the guise of the Bard! END_OF_DOCUMENT_TOKEN_TO_BE_REPLACED
This entry was posted on Friday, May 31st, 2013 at 9:05 am and tagged with A Funny Thing Happened on the Way to the Forum, Annie Harris, Crescent Theatre Birmingham, Dave Rodgers, James David Knapp, Keith Harris, Laura Poyner, Michael Jenkins, Nick Owen, review, Stephen Sondheim, Tiffany Cawthorne, Toby Davis, Tom Fitzpatrick and posted in Theatre Review. You can follow any responses to this entry through the RSS 2.0 feed.
« Making A Killing
A Season Has Been Arranged »

One response to “Something Appealing”