A box office hit in Shakespeare’s day, this Roman revenge tragedy packs more into its two-and-a-half hours than an entire series of The Jeremy Kyle Show.  It’s got the lot: murder, betrayal, mutilation, rape, and of course revenge.  It’s grisly, gory and gruesome, sordid, squalid and shocking.  And it’s bloody funny.

Stephen Boxer is in the title role as a man already steeped in tragedy and grief: most of his 25 sons have been killed in the wars he fights on Rome’s behalf.  The rest meet their doom pretty quickly.  Two are framed and executed for murder.  Another dies at Titus’s own hand in an almost casual neck-breaking scene.  Life is rough in this supposedly civilised empire.

Titus sacrifices a son of captive Goth queen Tamora, setting in motion a tit-for-tat vendetta that escalates to a blood bath in the final scene.  Katy Stephens is striking and strident as the queen with a grudge.  Fierce and fearsome – you wouldn’t want to get on the wrong side of her.  As with Boxer’s Titus, there is relish in the exacting of her revenge.

Titus’s brother Marcus (Richard Durden) is the calm voice of reason in the unfolding carnage.  His scene with the mutilated Lavinia (Rose Reynolds) is very moving.  Reynolds is the car crash you can’t help looking at.  Her agonies are fascinating.  With hands cut off and tongue torn out, she tries to smash and eat a boiled egg.  Horror and pity vie for dominance in the spectator.

Kevin Harvey brings a Merseyside twang to the villainous Aaron; his malevolence is not quite matched by Tamora’s sons, two chavs in hoodies riding bicycles and waving knives around (Perry Millward and Jonny Weldon).  You aren’t sorry to see them strung upside down, their throats slit and drained like pigs – This is the main theme of the piece.  Justice has been usurped by vengeance.  The punishments meted out on both sides could have been devised by the subscribers of certain Facebook pages.

Director Michael Fentiman sets his production in a sort of timeless, undefined space, using images we recognise from contemporary life and history.  Cowled monks in black mingle with big-haired women in biker boots. The soldiers’ tunics combine the historical and the contemporary.  The Emperor’s Italian suit is classic – John Hopkins’s Saturninus is an indulgent, immature figure, a comical bully.

I also liked Matthew Needham as Titus’s noble son Lucius but it is Boxer who dominates. His powerful grief turns to powerful madness before our very eyes.  When it all kicks off at the end, when it is revealed that Tamora has been tucking into her own sons baked in a pie, when everyone jumps from their places at table and the bloodshed is a fast and furious free-for-all, it’s a cathartic release that brings about a swift resolution to what constitutes the worst (or best) episode of Come Dine With Me in history.

The Elizabethans were more accustomed to brutality in the streets and public executions and all of that kind of thing.  This production shows us how we must guard against this violence and bloodlust.  “Thou art a Roman,” Marcus admonishes early on, “Be not barbarous.” 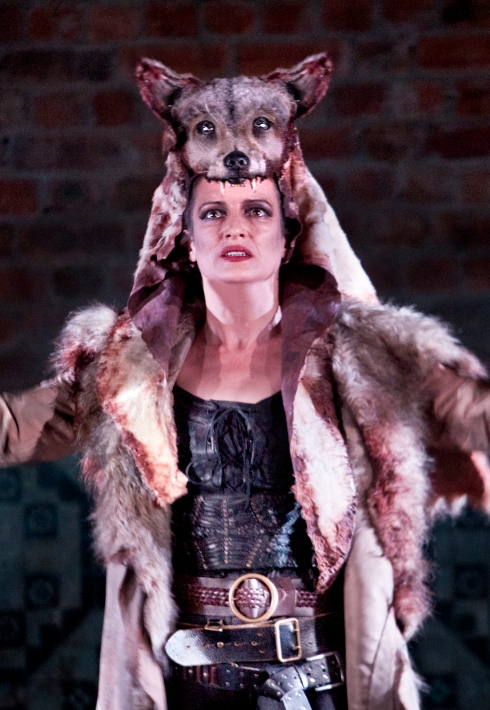 Novelist (Brough & Miller, sci fi, historical fantasy) Theatre critic http://williamstaffordnovelist.wordpress.com/ http://www.amazon.co.uk/-/e/B008AD0YGO and Actor - I can often be found walking the streets of Stratford upon Avon in the guise of the Bard! END_OF_DOCUMENT_TOKEN_TO_BE_REPLACED
This entry was posted on Wednesday, May 29th, 2013 at 9:41 am and tagged with John Hopkins, Jonny Weldon, Katy Stephens, Kevin Harvey, Matthew Needham, Perry Millward, review, Richard Durden, Rose Reynolds, RSC, Stephen Boxer, Stratford upon Avon, The Swan, Titus Andronicus, William Shakespeare and posted in Theatre Review. You can follow any responses to this entry through the RSS 2.0 feed.
« Hair Today
Making A Killing »

One response to “Bloody Marvellous”