It’s been years since I’ve seen Willy Russell’s incredibly successful musical and I have truly lost count of how many times I’ve seen it overall; so I was looking forward to reacquainting myself with its wit and melodrama.

Very little has changed.  There is a Nolan sister in the female lead as Mrs Johnstone (in this case it was Maureen but I think I’ve seen them all take a turn at least once) and the familiar redbrick terraced houses are still there – and this is because the show still works.  It doesn’t need a remould or touching up.  The sad fact is society has gone backwards to meet it: the social commentary has become piercingly pertinent all over again.

It begins with a rhyming prologue – a trick Willy Russell borrowed from Shakespeare’s Romeo & Juliet – in which the whole plot is sketched out, heightening the inevitability of the tragedy to follow.

Mrs Johnstone, abandoned by her husband, struggles to feed her host of children.  They cry out in hunger and it’s no longer a ‘weren’t-times-tough’ kind of vibe.  Child poverty in this country is back in vogue, folks.  But Mrs Johnstone is no scrounger.  Drowning in debt to the catalogue company, she gets a job cleaning for a middle-class couple in a nicer part of town.  Suddenly, superstition comes into play.  An ill-advised and illegal pact between the women is doomed to failure and destruction.  Mrs Johnstone gives up one of her newborn twin sons to the childless Mrs Lyons.  Despite their mothers’ best efforts the boys meet and become friends – they make a pact, unwittingly mixing the blood they already share.

The scenes with the grown-up actors playing kids are what give the piece most of its humour and heart, and what attaches us to the protagonists.  We see the unfairness of their separation and, by extension, the inequalities in society reflected in their different upbringings.  Sean Jones is particularly good as Mickey, from age 7 running around to adulthood depression and desperation.  Daniel Taylor is good and scary as older brother Sammy, suddenly wilting into petulance when his mam insists he goes indoors, and I was particularly impressed by Olivia Sloyan’s Linda who transforms from little girl to teenage temptress to desperate housewife.

Tim Churchill stalks around as a casually malevolent Narrator, the external force commenting on the action and subtly manipulating it.  With superstition a recurring theme, we wonder who he is.  The Devil perhaps…

Maureen Nolan is in excellent voice as chirpy Mrs Johnstone – the explosive denouement still shocks and the final song is as devastating as ever .   Even if you’ve seen it before – and there were many people in the auditorium who keep going back time and time again.  Although it has finally closed in the West End, the show seems to be perennially on tour – you never have to wait long to get another fix of sardonic Scouse humour and witty lyrics, and it continues to do great business wherever it goes.

The Narrator poses the question directly to us: is it superstition or class that is behind the tragedy.  He asks us to look for real-life causes of poverty, injustice and oppression.  The class war is still very much with us and this 28 year old nostalgic story seems bang up-to-date and a little subversive.

Willy Russell’s feel-bad musical celebrates the humanity of the poor – something which is viciously overlooked by today’s coalition government. 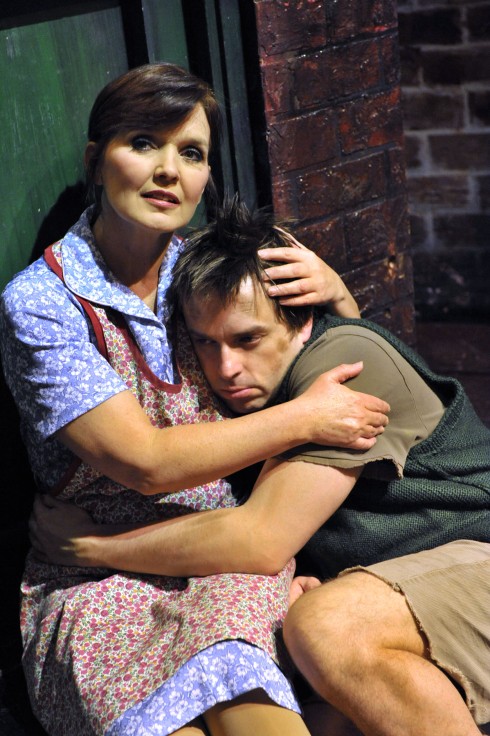 Novelist (Brough & Miller, sci fi, historical fantasy) Theatre critic http://williamstaffordnovelist.wordpress.com/ http://www.amazon.co.uk/-/e/B008AD0YGO and Actor - I can often be found walking the streets of Stratford upon Avon in the guise of the Bard! END_OF_DOCUMENT_TOKEN_TO_BE_REPLACED
This entry was posted on Tuesday, April 30th, 2013 at 8:25 am and tagged with Blood Brothers, Grand Theatre Wolverhampton, Maureen Nolan, musical, Olivia Sloyan, review, Sean Jones, Tim Churchill, Willy Russell and posted in Theatre Review. You can follow any responses to this entry through the RSS 2.0 feed.
« Arden Admirers
Recipe for Hilarity »

One response to “Pact Houses”