David Farr sets his Elsinore in an old-school school hall.  Wood panelling covers the walls.  Low benches from P.E. lessons and metal-framed stacking chairs.  Upstage, steps lead to a proscenium arch and a platform with some heavy duty chairs and table.  The wooden floor is marked with tramlines and fencing foils hang from the walls.  Fire doors lead off to the exit.  Above the proscenium, rather subtly, is the legend, Mens sans in corpore sano.  There is also a handbell knocking around but it’s the accoutrements of fencing that dominate – the sport rather than the gardening variety.  The masks especially are put to good use (Hamlet’s dad’s ghost wears the full rig-out) and the foils are put to almost constant use.

Hamlet (Jonathan Slinger) appears right at the start, in a black suit, still sobbing over his father’s death and what has followed.  With that suit and his specs, he looks like Philip Larkin.  But rather than a provincial librarian turned poet, Hamlet is a student at Wittenberg University – a mature student, it would appear.  We are in the early 1960s, judging from Jon Bausor’s designs – Ophelia (Pippa Nixon) in skirt, tights and sensible shoes is either a student or teacher, or perhaps a student teacher, shedding an armful of exercise books to throw herself into a passionate embrace with Philip Larkin, sorry, Prince Hamlet.  Horatio sports a jacket with leather patches at his elbows.  Laertes wears a polo neck.  This is the era before hair got really long and clothes became really colourful.

It’s a dingy Denmark, traditional and staid. But as we know, there is something rotten in the state.  The problem with Hamlet, I find, is it’s too familiar.  Almost every line is a famous quote.  It’s like Shakespeare’s Greatest Hits or even the English Language’s Greatest Hits.  So much of the play has entered common usage, it takes an excellent production to make the lines sound fresh and new and current within the context of the production.  This one does that, but patchily.  I suppose if this is your first Hamlet it’s a strong one but a long one to begin with.

Slinger doesn’t look like a Hamlet but he sounds like one and can drive a good soliloquy.  He has an impressive range of sarcastic gestures and mockery, and his energy never flags in a performance of contrasts and colours, mood swings and madness.  At one point he enters singing Ken Dodd’s Happiness but sadly without the tickling stick.  In scenes with his mother (Charlotte Cornwell) his petulant, rather teenage protestations are perhaps the greatest stretch of credibility, but on the whole this melancholy prince gives an impressive turn.  If you disregard the fact that he’s breaking most of the instructions he gives to the Players when they arrive.  Like his half-on and half-off fencing armour, the part doesn’t quite fit him, try as he might.

Nixon is a striking Ophelia, abused by Hamlet: he strips her down to vest and tights as if she’s forgotten her PE kit – and by the director: she has to lie dead in the dirt downstage centre for the final scenes while all around her is action and murder.  Horatio (Alex Waldmann – now there’s a Hamlet I would like to see) is a beatnik intellectual but no less genuine in his affection for his royal friend.  Greg Wise doubles as Claudius and the brother he murdered; his Ghost of Hamlet’s Dad is eerie and moving, while his murderous Claudius keeps a tight rein on himself until he’s alone and at prayer.  It was a special treat for this Rock Follies fan to see Charlotte Cornwell as an elegant Gertrude, looking fabulous in couture but also powerful as the woman who has unwittingly participated in her own and everyone else’s downfall.

I adored Robin Soans’s prissy and self-important Polonius and was sorry to see him stabbed behind the arras (ouch!) and as his son, Laertes, Luke Norris cuts a dashing figure.  His final confrontation with Hamlet doesn’t look like a fair fight, and indeed, it isn’t.

It’s well worth seeing but it’s more of a “Let’s see how they do this bit” kind of show rather than an engaging presentation of tragedy.  I didn’t get beyond regarding the actors as actors, or appreciating the technical aspects of the production, rather than being moved by the characters. 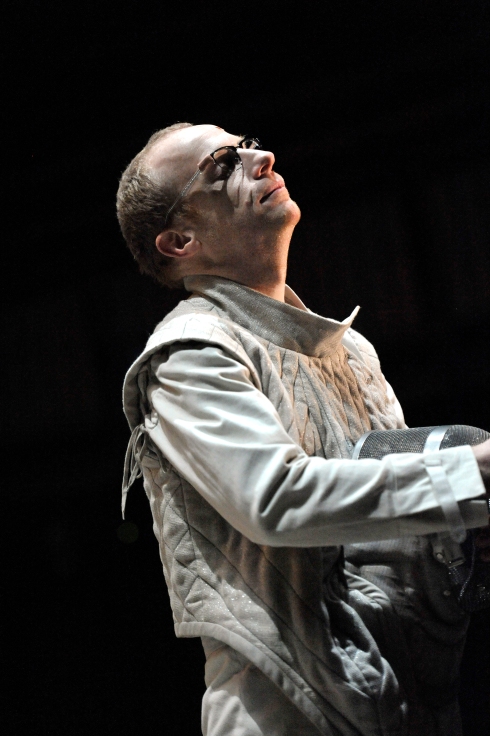 Larkin about (Photo by Keith Pattison)

Novelist (Brough & Miller, sci fi, historical fantasy) Theatre critic http://williamstaffordnovelist.wordpress.com/ http://www.amazon.co.uk/-/e/B008AD0YGO and Actor - I can often be found walking the streets of Stratford upon Avon in the guise of the Bard! END_OF_DOCUMENT_TOKEN_TO_BE_REPLACED
This entry was posted on Friday, March 29th, 2013 at 9:42 am and tagged with Alex Waldmann, Charlotte Cornwell, David Farr, Greg Hicks, Hamlet, Jon Bausor, Jonathan Slinger, Luke Norris, Pippa NIxon, review, Robin Soans, Rock Follies, RSC, Shakespeare and posted in Theatre Review. You can follow any responses to this entry through the RSS 2.0 feed.
« Pitting Their Wits
Fandom of the Opera »

One response to “They F*** You Up, Your Mum and Uncle”