Seventy years ago the film appeared as an antidote to the Great Depression. The Cinderella story of the chorus girl who becomes an overnight star is a cliché, to be sure, but the plot is not the point of this new touring production. As in the 1930s, we are invited to escape from our hardships and the economic decline, and spend a couple of hours looking at things through optimistic eyes. Every situation has a sunny side, or so they tell us.

This opulent, extravagant cartoon of a show is a real tonic. Director Mark Bramble handles the heightened world of musical comedy with exactly the right tone. We are never allowed to overlook the artifice of such a world but also the bubble of this world is never punctured: backdrops are painted flat – even the curtain is painted to look like a curtain! In this world, girls tap-dance their way along the street and it’s perfectly natural.

The songs are standards, all tuneful and with witty lyrics: We’re In The Money, Keep Young and Beautiful, Lullaby of Broadway…; the dialogue sparkles and the cast play their roles with larger-than-life gusto – Bruce Montague as rich Texan backer Abner Dillon is a case in point, drawling out his words, just the right side of parody. Dave Willetts is the irascible Broadway producer barking orders and terrorising everyone – but then, with Lullaby of Broadway, we get to hear that smooth singing voice that gives rise to shivers along the spine. James O’Connell’s Billy Lawlor croons “I’m young and healthy” – no argument from me! Graham Hoadly and Carol Ball are an energetic double act – the comic turns of the show-within-the-show – in fact, the entire company infuses the show with such verve, their enthusiasm is irresistible.

Jessica Punch is astounding as wannabe chorine from the sticks whose rise to Broadway fame is somehow inevitable. Fast-talking and even faster-tapping, her Peggy Sawyer is an oddball character, and a force of nature. But for me the highlights are whenever Marti Webb comes on. As past-her-sell-by diva Dorothy Brock, Webb is clearly enjoying herself. She pitches the characterisation just right and when she sings, that clear, steady voice reaches inside you and grabs at your emotions. I Only Have Eyes For You is worth the ticket price alone, but there is also humour within the character, just the right side of send-up.

The choreography – you might quail at the thought of two hours of tap-dancing – never falls short of impressive. Graeme Henderson keeps each number fresh and different, whether its small-scale, sitting at a restaurant table or full-blown, full company covered in sequins on an illuminated staircase. It’s a large company – which is always good to see in a touring production – and rightly so, to give the full Busby Berkeley effect. A mirror suspended over the stage reveals the kaleidoscopic patterns made by the dancers on the floor. They dance on giant coins, they dance as giant flowers – it’s all high camp and a delight from start to finish.

Go and meet those dancing feet. The tireless cast will recharge you as the dank nights of winter draw in. 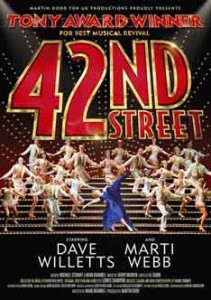 Novelist (Brough & Miller, sci fi, historical fantasy) Theatre critic http://williamstaffordnovelist.wordpress.com/ http://www.amazon.co.uk/-/e/B008AD0YGO and Actor - I can often be found walking the streets of Stratford upon Avon in the guise of the Bard! END_OF_DOCUMENT_TOKEN_TO_BE_REPLACED
This entry was posted on Wednesday, October 31st, 2012 at 9:47 am and tagged with 42nd Street tour, Bruce Montague, Dave Willetts, Graeme Henderson, Grand Theatre Wolverhampton, James O'Connell, Jessica Punch, Mark Bramble, Marti Webb, musical comedy, review and posted in Theatre Review. You can follow any responses to this entry through the RSS 2.0 feed.
« A Tale of Atrocities
Frank Speaking »