A Tale of Atrocities

Horrible, self-obsessed couple Julian and Cressida Field sit in their Sussex garden. He is barking business deals into his mobile; she is agonising over an essay for her degree in gender studies. They are also mourning the loss of family pet, Rosie the Cat. Their gardener and general factotum, Roman (or Romka, for short) is also grief-stricken and busies himself with fashioning a marker for the moggy’s grave.

Ronald Harwood’s play gets off to an amusing start. We are drawn to Romka, a man who speaks in a funny accent and looks like he’s stuffed with Werther’s Originals. Suddenly the lives of the Fields are thrown into turmoil with the arrival of detectives from the War Crimes squad of Scotland Yard. Lovely, cuddly Romka is suspected of the murder of 817 Jews in the Ukraine. Who would have thought?

Julian (Adrian Lukis) blows his top, an Englishman averse to having his castle invaded. Cressida (Caroline Langrishe) can’t believe a word of it. They hire a solicitor (Carolyn Backhouse) who though not Jewish herself, is married to one – surely that must work in the old man’s favour!

Romka (Timothy West in a measured, dignified performance) denies everything – he was only the cook, after all. As the play unfolds, Harwood keeps us guessing. It’s perhaps a case of mistaken identity. He was there but took no active part in the massacres… The detectives aren’t really characters but devices who through questioning enable information to come to light. We see testimony given on video by Steven Berkoff in a chilling turn as a cheerful monster and, very powerfully, by Vanessa Redgrave as a surviving eyewitness.

What the play leads up to is an examination of what the holocaust means today. Cressida is dismissive. “It’s ancient history,” she snaps. “Poor old men shouldn’t be hounded”. Further to that, the play warns against the danger of those who seek to deny these most terrible events ever took place. In a shocking outburst, we are shown the true meaning of “the personal is political” – the theme of Cressida’s university essay, and there are parallels drawn between the cat buried in the garden and the hundreds in a mass grave in some Ukrainian wood. The play is a reminder that the holocaust will always be relevant – those who consign it to the past or dismiss it as ‘the Jewish fantasy’ are destined to repeat it.

Director Joe Harmston handles the changing tones very well. The humour and the horrors each get their turn. Of the lot of them, only Romka comes across as a rounded character with warmth and humanity – the point being that it was humans that perpetrated the atrocities not some external ‘evil’ or influence that made them different from the rest of us. West’s performance is for the most part understated, and all the more compelling for it. Lukis and Langrishe are effective as the blowhard couple. Backhouse is attractive as the efficient solicitor who is pushed too far; and James Simmons and Anthony Houghton lend solid support as the investigating officers.

It’s a powerful piece, an important piece, stylishly presented and an intelligent and provocative contribution to the discussion. You emerge thinking more about the issues than the drama – in that sense at least, the drama does its job very well. 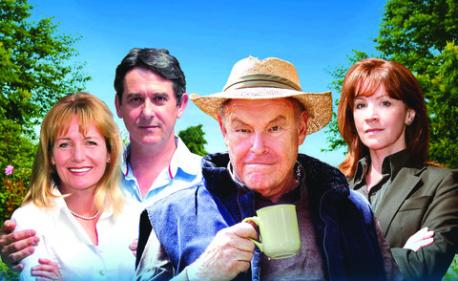 Novelist (Brough & Miller, sci fi, historical fantasy) Theatre critic http://williamstaffordnovelist.wordpress.com/ http://www.amazon.co.uk/-/e/B008AD0YGO and Actor - I can often be found walking the streets of Stratford upon Avon in the guise of the Bard! END_OF_DOCUMENT_TOKEN_TO_BE_REPLACED
This entry was posted on Thursday, October 25th, 2012 at 7:40 am and tagged with Adrian Lukis, Anthony Houghton, Caroline Langrishe, Carolyn Backhouse, James Simmons, Joe Harmston, Malvern Theatres, review, Ronald Harwood, Steven Berkoff, The Handyman, Timothy West, Vanessa Redgrave and posted in Theatre Review. You can follow any responses to this entry through the RSS 2.0 feed.
« Recycled Material
42nd Treat »