John Godber directs this ‘remix’ of his 1977 play, proving that in 35 years, little has changed in the culture he depicts with equal measures of affection and cruelty. It remains his best work.

Four men in dark suits and black tees, complain about their lot on the doors of the ‘Asylum’ disco/nightclub. They also become their customers, a group of girls and a group of lads as they plan, prepare for and enjoy a Friday night out on the piss and on the pull.

With a few deft strokes (and the addition of a handbag) the caricatures appear – some of their features are exaggerated but they are all grounded in reality.

Don Gilet is bouncer Les but he really comes to life when depicting the punters, male and female. William Ilkley is the brutish Judd – his Plain Jane girl could have fallen out of Viz magazine. Ace Bhatti’s sexy Suzie encapsulates the precocious teen who, beyond dressing up and applying make-up, doesn’t know what she’s doing. But it is Ian Reddington as Lucky Eric, the lynchpin of the piece, who really shines in all of his incarnations. He is afforded four soliloquies, each darker than the last, revealing the seamier side of the revelries. He implores us to look at the Big Night Out as something more sinister – this is not some tract expounding the medical dangers of alcohol abuse but rather a lone voice crying in the wilderness. Why is this weekly ritual all that life has to offer these people, “the working class with no other options, in a country that hates them, drinking themselves to death.”
When he details the degradation of a woman in a pub, or sexy Suzie’s grubby sex in an alley, it is horrific. We feel as helpless as him. A certain slice of British society has been held up for ridicule, disgust and ultimately pity.

The play covers similar ground to Willy Russell’s Stags and Hens, but this is the in-your-face Brechtian version, revelling in its own theatricality and artifice. The cast is a tight ensemble, a chorus, united in movement and verse. The minimal staging – four metal beer barrels and some stairs – is plenty. The characterisations, forged from gesture and voice, make the audience create the details in their imaginations, filling out the sketches into portraits of people we recognise. In the hands of this excellent, tight-knit group of actors, it remains a powerful tool.

The ‘remix’ is really cosmetic. Mobile phones, YouTube, Joey Barton – names and music are updated but the heart and the meaning of the play remain intact. Only the scene (albeit hilarious) in which the bouncers act out a ‘bluey’ seems like a relic from a bygone age, merely because film projectors have been superseded by the digital age.

I am certain the audience, containing several large parties of GCSE students, got a lot from this dazzling and funny display of theatrics, but I know, with the frustrated fatalism of Lucky Eric, that these kids will go on to live out many of the experiences depicted on the stage, and not because they saw them played out on stage. Rites of passage are one thing but when it comes to the adoption of a lifestyle I have to agree with the play: Something is rotten in the state of Primark. 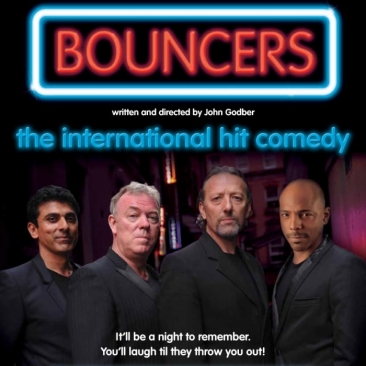 Novelist (Brough & Miller, sci fi, historical fantasy) Theatre critic http://williamstaffordnovelist.wordpress.com/ http://www.amazon.co.uk/-/e/B008AD0YGO and Actor - I can often be found walking the streets of Stratford upon Avon in the guise of the Bard! END_OF_DOCUMENT_TOKEN_TO_BE_REPLACED
This entry was posted on Thursday, September 20th, 2012 at 9:12 am and tagged with Ace Bhatti, Bouncers, Don Gilet, Ian Reddington, John Godber, Malvern Theatres, review, William Ilkley and posted in Theatre Review. You can follow any responses to this entry through the RSS 2.0 feed.
« Crowd Pleasers
Shockingly Good »