Simon Stephens’s adaptation of Mark Haddon’s much-loved bestseller is nigh on perfect. Translating what is largely an ‘internal’ book to the stage, the production is deceptively simple. There is no set to speak of. Actors bring on and take off nondescript white boxes to serve as tables, chairs, seats on a train, a walk down an escalator… Lighting defines sharp squares and oblongs for different rooms, different houses. Performed in the round, the design for this show is all about the floor. Marked up with a grid (that reminded me of Star Trek’s holodeck!) the stage is riddled with LEDs that both lead and trail the protagonist on his journey. Projections help to convey the impression of a tube station, a train ride and so on. It is all both complex and economical.

But of course it is the actors who are the keys to open up this story of a teenager on the Asberger’s syndrome trying to solve the mystery of who murdered his neighbour’s dog with a garden fork. As 15 year old Christopher, Luke Treadaway is both magnetic and a little disturbing. This is no white-washed sentimental portrayal. We understand his parents’ frustrations and admire his mentor’s patience, all the while caring for this boy. His direct and literal approach to life amuses; his violent rejection of physical contact touches us. It is a remarkable portrayal.

As mentor Siobhan, Niamh Cusack also doubles as a narrator. It is revealed as the action unfolds that we are watching a dramatisation – the whole play is a play-within-a-play, cranking up the cleverness level. Along the way we meet a host of characters, walk-ons and cameos, and it is particularly delightful to see Una Stubbs, bright-eyed as ever, as elderly neighbour Mrs Alexander.

Marianne Elliott’s direction keeps a complex set-up clear, working the cast like cogs in a super-efficient machine. Movement sequences are particularly effective, stylised in such a way to be evocative and supportive of the narrative.

Now, some people are rather snobbish about the whole enterprise of live broadcasts to cinema screens. Everyone should go to London and see the shows live, they say. Well, I’m sure everyone would if they could (as if the scramble for National Theatre tickets isn’t bad enough already). But for occasions when that is not possible, a trip to the local cinema is a more-than-adequate substitute. With this particular production it could be argued that the cinema audience actually gains something – as well as affording us close-ups of the actors, we also get bird’s-eye views of the stage, making the projections and floor work perfectly clear. What you lose on the swings of being present for the live experience, you gain on the roundabouts of multi-angle cameras. 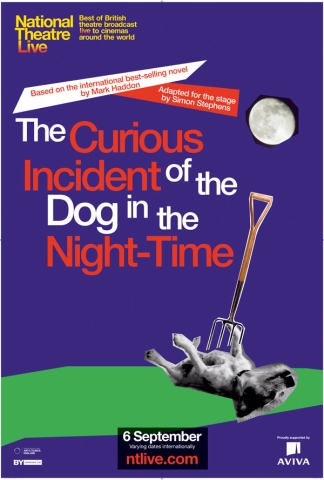 Novelist (Brough & Miller, sci fi, historical fantasy) Theatre critic http://williamstaffordnovelist.wordpress.com/ http://www.amazon.co.uk/-/e/B008AD0YGO and Actor - I can often be found walking the streets of Stratford upon Avon in the guise of the Bard! END_OF_DOCUMENT_TOKEN_TO_BE_REPLACED
This entry was posted on Friday, September 7th, 2012 at 8:12 am and tagged with Curious Incident of the Dog in the Night Time, Luke Treadaway, Marianne Elliott, Mark Haddon, National Theatre Live, Niamh Cusack, review, Simon Stephens, Una Stubbs and posted in Theatre Review. You can follow any responses to this entry through the RSS 2.0 feed.
« Wood for the Trees
Imperfect Storm »