I don’t usually review stand-up on this blog but then this is not your usual stand-up show. Comedian and actor Isy Suttie (you’ll know her as Dobby in Peep Show) performs a one-woman show, a story with songs that packs into its running time wit, wisdom, bathos and pathos (my two favourite musketeers!).

Armed with her acoustic guitar and sparkling eyes, Suttie is prettier than you might expect. Dressed in a shapeless sweatshirt and with a casual manner, she gives off signals that this is an informal affair. What you might think is opening preamble is the start of the show proper, easing us in and setting the scene. As children, she and her sister accidentally became pen friends with a man who lived a couple of doors away. The correspondence continues over the years, developing from swapping notes on what they had for tea to recounting tales of romantic encounters, failed and otherwise.

This man, the eponymous Dave, met a girl during a sojourn at Butlin’s, and feels she is the one that got away. Innovations in internet technology such as Friends Reunited (remember that?), FaceBook and Skype, mean he is able to track down this Pearl and resume contact. Pearl is unhappily married in Guildford. Their relationship is rekindled and flourishes, and we get glimpses of the progress made through a series of amusing songs Victoria Wood would kill to have written.

Running alongside this is a subplot telling of Suttie’s own experiences with boyfriends good and bad (not forgetting Roy, the papier-mâché penguin), as a counterpoint to the grand passion of Pearl and Dave.

The performance is deceptively laid back, seemingly effortless. There is plenty to smile at, more at which to laugh out loud and, most surprisingly, a great deal that tugs at the heartstrings. By the end, when Pearl and Dave have found a way of managing their acquaintance, it is so bittersweet I was trying to clap my hands down to bloody stumps and at the same time wipe away tears.

Funny, touching and altogether charming, Pearl & Dave strikes a balance of the nostalgic and the up-to-date. It is a satire and a celebration of the ways we communicate. 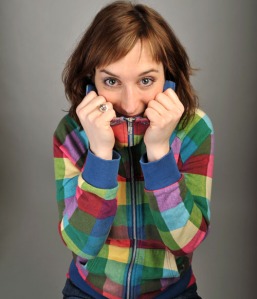 Novelist (Brough & Miller, sci fi, historical fantasy) Theatre critic http://williamstaffordnovelist.wordpress.com/ http://www.amazon.co.uk/-/e/B008AD0YGO and Actor - I can often be found walking the streets of Stratford upon Avon in the guise of the Bard! END_OF_DOCUMENT_TOKEN_TO_BE_REPLACED
This entry was posted on Monday, May 14th, 2012 at 7:44 am and tagged with Isy Suttie, Pearl & Dave, review, Warwick Arts Centre and posted in Theatre Review. You can follow any responses to this entry through the RSS 2.0 feed.
« Hard to Digest
Lessons from the Past »