An exorcism has been botched. A teenager is dead. The man who performed the exorcism is jailed on a manslaughter charge. What makes this supernatural thriller different from others of the genre is that Roman Catholicism is not the starring religion. Neither is Voodoo. This time it’s Islam at the core of the conflict. This innovation keeps the drama fresh.

This new play by Naylah Ahmed keeps the audience intrigued as the mystery unfolds and tension builds. The prisoner, the titular Mustafa (a softly spoken and dignified Munir Khairdin) is put in isolation – a disused wing of the prison is re-opened just for him – following an incident in the dining hall. His lawyer Shabir (the excellent Gary Pillai) is also his brother. It is in the scenes between these two that the writing is at its best. One is a mullah, the other is a lapsed Muslim who likes a drink and the “easy life”. And so an extra layer is added to the central conflict. Shabir doesn’t believe the djinn Mustafa drove from the boy is now possessing his brother. And at first, the audience is presented with clues that yes he might be, or no, he’s mentally ill.

Of course, being a ghost story, the play has to uphold the belief that these supernatural beings exist – if only for the purposes of plot development at least. It made me think of the use of religion in entertainment. It happens all the time. Greek mythology fills cinema screens to this day. Christianity (usually Catholic) is a staple of horror films from Dracula to The Exorcist to Drag Me To Hell. Does their place in these stories validate them or reduce them to tropes in story-telling? This play has the same failings as others of its type. Those who believe will come away with a different feeling to those who don’t. I am willing to suspend disbelief and go along for the ride as long as the ride is an effective one.

We also meet two ‘screws’. They are a pair of bickering Brummies played by Paul McCleary and Ryan Early. My problem with these two is it’s difficult to distinguish when they are providing comic relief from when they are trying to be menacing. When the djinn manifests itself, in the form of the younger prison officer, it is laughably unthreatening, suffering the worst dialogue of the piece. Ahmed strings together vernacular idioms and colloquialisms as though writing Naturalism by numbers. “That Mo’s a goon, who’s been in and out of here since he was sixteen – he doesn’t know jack.” The dialogue is slang-heavy to the extent it sounds unreal. Sometimes plain-speaking is more effective than trying to capture local colour.

As the play draws to its conclusion and Mustafa strives to prevent the djinn from claiming another victim, lights fizzle and pop, smoke billows about –there is a nifty bit of misdirection with a fire extinguisher – but The Woman In Black this ain’t. Better handled, this could be a taut little chiller with something to say about Westernisation as well as providing a few scares. Although the plot kept me intrigued, the tension was diluted by the overwritten dialogue and Mustafa ended up, I’m sorry to say, a bit of a damp squib. 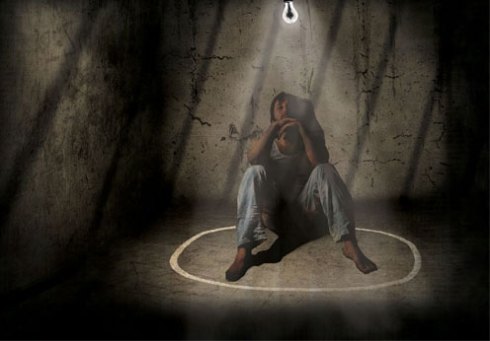 Novelist (Brough & Miller, sci fi, historical fantasy) Theatre critic http://williamstaffordnovelist.wordpress.com/ http://www.amazon.co.uk/-/e/B008AD0YGO and Actor - I can often be found walking the streets of Stratford upon Avon in the guise of the Bard! END_OF_DOCUMENT_TOKEN_TO_BE_REPLACED
This entry was posted on Thursday, April 19th, 2012 at 7:36 am and tagged with Brimingham REP, Gary Pillai, mac, Munir Khairdin, Mustafa, Naylah Ahmed, review and posted in Theatre Review. You can follow any responses to this entry through the RSS 2.0 feed.
« Rich and Infamous
Big Laughs »