What is it about tap-dancing? Whenever I see a chorus line tapping and ball-changing away, there is something uplifting and infectiously enjoyable about it, I break into a grin and feel benevolent to all mankind. Is this what straight men get from watching sports?

This is a gloriously old-school show, adapted from the old movie and played straight without knowing looks or postmodernist irony. And it works a treat.

It tells the somewhat hackneyed tale of a show within a show: young girl auditions for a chorus line, is given her lucky shot at playing the lead on opening night, becomes an overnight star… It’s been done so many times before but what keeps this ticking along is the superior score. The hits keep coming: I Only Have Eyes For You, We’re In The Money, Lullaby of Broadway… all classics in their own right.

Daisy Maywood shines as chorine-turned-superstar Peggy Sawyer. Francis Haugen’s leading tenor has enthusiasm and pizzazz without making you want to strangle him and Tim Flavin cuts an imposing figure as Florenz Ziegfeld-type director and impresario, Julian Marsh. Strongest in my eyes are Ria Jones as diva Dorothy Block who breaks a leg literally so that Peggy can break one figuratively, and Lisa Donmall Reeve as Ann Reilly.

The choreography by Andrew Wright is dazzling. George Souglides’s costumes, and set design by Ashley Martin-Davies create a sense of the 1930s and the backstage atmosphere. During the Great Depression, people would flock to such escapist fare and today we are no different. There is a pertinence and a relevance to the songs that strikes a chord in these straitened times. The wistful optimism of lines like “If you got no money, you don’t pay income tax” and “if you got no job, pretend it’s your vacation”, are funny but also sad.

A welcome respite from all the pantomimes and seasonal shows that are everywhere at this time of year, 42nd Street is a celebration of talent and ability, executed to wonderfully high standards. I defy anyone to go and see this joyous production and not come out with a huge and gormless grin on their face. 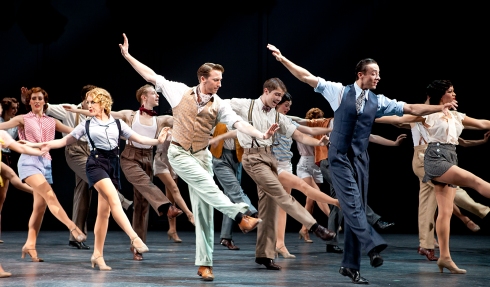 Novelist (Brough & Miller, sci fi, historical fantasy) Theatre critic http://williamstaffordnovelist.wordpress.com/ http://www.amazon.co.uk/-/e/B008AD0YGO and Actor - I can often be found walking the streets of Stratford upon Avon in the guise of the Bard! END_OF_DOCUMENT_TOKEN_TO_BE_REPLACED
This entry was posted on Friday, December 23rd, 2011 at 1:20 pm and tagged with 42nd Street, Curve Leicester, musical, review and posted in Theatre Review. You can follow any responses to this entry through the RSS 2.0 feed.
« Super furry animals
A Christmas Turkey »

One response to “Talent on Tap”