It’s always a thrill when Kneehigh tour a new show – they have certainly set the bar high for themselves with previous productions such as Tristan & Yseult, Cymbeline and Brief Encounter.  They don’t always match the excellence of these shows but they often come close.

This latest offering is up there with the best.  Based on a folk tale, it has all the hallmarks of a Kneehigh production: the on-stage musicians, the beautiful puppetry, emblematic theatre, poetic dialogue, emotive movement… Director Emma Rice has established a theatrical style that is so very rich and effective, you can understand why the auditorium was filled with Drama teachers and their students: you could teach an entire performing arts course by looking at Kneehigh alone.

The eponymous heroine is portrayed by the three actresses of the company, representing the character at different stages in her story.  That they don’t speak (the unfortunate woman expresses herself through bouts of interpretive dance), coupled with the behanding of the girl at a young age, suggests the powerlessness of not just her, but all women.  One of the two male actors, Stuart McLoughlin as the Devil Himself, sneers that this is “a feminist folk tale”, and so it is, but it is also more than that.   Emma Rice is savvy enough to include all humanity in the play, tapping into the collective unconscious with fairy tale imagery (Note to Drama teachers: get your students to flick through Bruno Bettelheim).

This is narrative theatre and in narrative theatre, anything can happen.  The girl, now a wife and mother living wild in the woods, grows a new pair of hands.   We believe it because we recognise on a subconscious level this means something else.  Only when she is whole again does she speak, with the Hungarian lilt of the striking Eva Magyar.  She has survived every ordeal the play has thrown at her.  She defeats the Devil and gets him off her case.  She is reunited with her prince, who has also been living wild in the woods, and they form a family group and a happy ending having regained entry into Eden, you might say.

The music, which plays throughout most of the evening, is bluesy and seductive.  There is some searingly beautiful singing from the diminutive Audrey Brisson, matched by the plaintive fiddle-playing of Patrycja Kujawska – the company of five are called upon to pick up instruments and play along with Ian Ross to provide a soundtrack for the unfolding drama.  The design is American Depression, the kind of clothes The Waltons would wear.  Stuart Godwin as the Father and later, the Prince, delivers most of the show’s comedy  and displays a nifty spot of legwork in his rather fetching kilt. The Devil sports a pinstripe suit, like Ryan O’Neal’s travelling Bible seller in Paper Moon.  He represents the establishment and organised religion, both of which cripple and hinder the potential of women to fulfil themselves.

Not that Kneehigh is ever preachy.  Everything is transmitted in a symbolic way, affecting us on an emotional level rather than the intellectual.  Even the blinding and mutilation of a deer has a savage beauty.  Poetry is not confined to Carl Grose’s witty and poignant script. 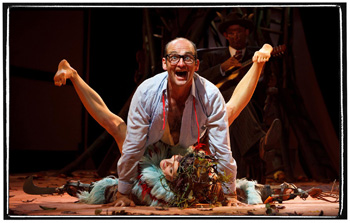 Novelist (Brough & Miller, sci fi, historical fantasy) Theatre critic http://williamstaffordnovelist.wordpress.com/ http://www.amazon.co.uk/-/e/B008AD0YGO and Actor - I can often be found walking the streets of Stratford upon Avon in the guise of the Bard! END_OF_DOCUMENT_TOKEN_TO_BE_REPLACED
This entry was posted on Friday, October 28th, 2011 at 7:31 am and tagged with Emma Rice, Kneehigh, review, Warwick Arts Centre, Wild Bride and posted in Theatre Review. You can follow any responses to this entry through the RSS 2.0 feed.
« Oh dear, what can the Marat be?
Bear Witness »